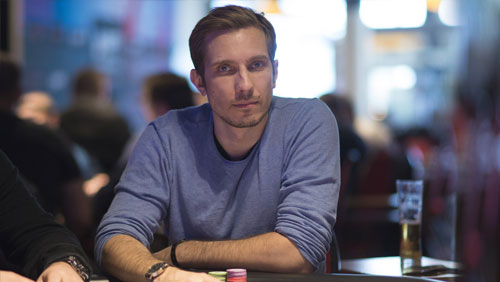 Lee Davy catches up with the World Poker Tour Champion, Julian Thomas, during the Triton Poker Series in Montenegro to talk about his role in the German squad, his progression in the game, and why Dominik Nitsche thinks he’s the next big thing.

I was in Montenegro to interview High Stakes poker players. The organisers sent me a list of names. I went through the list and stopped when I came to the name of Julian Thomas.

I was there when Julian won his World Poker Tour (WPT) title in Prague. It proved he had what it takes to win a major title. But is he a High Stakes poker player?

I sent Dominik Nitsche a text:

“If you were creating a High Roller website, and only interviewed High Rollers, would Julian fit into that mould?”

“He plays all the High Rollers and is extremely underrated. He’s one of my favourites of the lesser known German players to have a great year.”

So I tracked him down.

How does it feel to be called a WPT Champions Club member?

“It seems so long ago. It’s been a few years since I last won a live tournament. But it sounds good.”

And you were the first from a pretty impressive group of people to win a WPT title, right?

“When me, Rainer Kempe and Fedor {Holz} started playing live seriously I was the first one who won a major tournament and had a lot of deep runs. After that everyone else won ten times more than me!”

When I saw you win the WPT title you came from nowhere. Today, you are playing in the biggest stakes in the game, what’s changed?

“Back when I first started playing live it was 2013. I had never played higher than $200 online when I qualified for a $5k Main Event. These games always seemed so far away from me. I never thought I could play a $5k or a $10k. However, when I sat there, I felt I could beat these games. And when I met Rainer, Fedor and bencb789 who in my opinion is the best online tournament player. When I worked with these guys, I could feel the edge. When I played my first Super High Roller (SHR) that was special.”

How did it feel?

“Back then I felt really, really comfortable. It was the time I worked the hardest on my game. I felt really confident back then.”

Dominik Nitsche told me that you are going to be the next star at these stakes. Why does he have so much faith in your game?

“Christian {Christner} and Dominik – of all the people I know, they are the hardest workers. I am Top 3. We might not be the most talented, so we have to compensate with hard work. Dominik knows my game well. I have had some good online results, but nothing live yet. I think it’s just a matter of time, but let’s see.”

It wasn’t that long ago that Dominik was on the edge of things, and then boom, he wins $4m.

“We were always making fun of Dominik because he kept firing bullets but never cashing. Even Stephen Chidwick. He had some rough years where he was bubbling everything, and now he is just winning everything and crushing.”

Dominik was saying that luck plays a significant role in the SHRs because the edges are so close.

“Everybody has his part of the game that’s good. Ike {Haxton} is excellent deep stacked for example. Dominik is strong in other areas of the game. Combined, the edges are pretty thin, and everyone will have a big winning streak from time to time.”

When people talk about ‘The Germans’, I never know who they are referring to. Who is in the group these days?

“In the beginning there was Koray {Aldemir}, Fedor, Rainer, me, Ben and then Steffen {Sontheimer}. There are so many Skype and Whatsapp groups which different Germans are in. We do have one big Skype group with 35 German players. The people playing the SHR’s are just the tip of the iceberg. There are many more really good players.”

Who isn’t playing the highest stakes, but would feel comfortable if they made the transition?

“There are a lot of players who could play them. Some people who are rarely mentioned in this context are the Finns and the Swedes. Simon “C Darwin2” Matsson and Niklas “lena900” Asted win everything online. Every day they play they win something and are very difficult to play against. I like the Finns, Samuel “€urop€an” Vousden and Tomi “elmerixx” Brouk. They are part of the bitB stable, and they have won everything. Patrick Leonard is another one. He is the founder of bitB and what he has managed to create is awesome.”

It feels suicidal to try and make it, alone.

“It’s impossible. In the bitB group, which I am a part of, there are a lot of hidden gems. If they bring their online game to the live game they could beat the SHRs. 4-5 people in this stable would crush the games and people don’t know who they are.”

Maybe bitB could train the online crushers to play in the SHRs?

“If they get too big nobody will beat them anymore. There will be too large a percentage of good players and we wouldn’t be able to beat the rake anymore.”