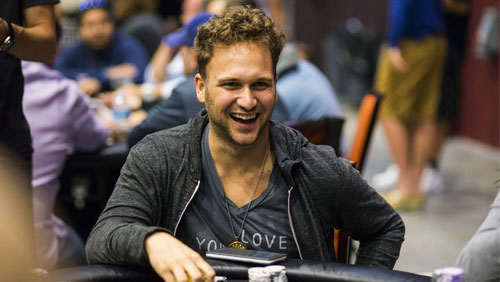 Highlights of the early PokerStars Spring Championship of Poker news including two more titles for Calvin Anderson, a place in the $10m club for lena900, and more.

A sit in the corner, hidden like the Cigarette Smoking man, a boardroom table as long as the world, with turquoise chairs full of ghosts squeezed underneath on both sides. I can hear the sea, outside, or is it the air conditioning?

Both sounds are alien to me.

I don’t know what to write about.

I think about the Spring Championship of Online Poker (SCOOP), but the PokerStars blog does a sterling job of keeping the poker world up to speed on the comings and goings of one of the most brilliant online festivals.

But I can’t ignore some of these achievements.

So here we go.

The first person who deserves a prawn cocktail is Calvin ‘cal42688′ Anderson who broke his SCOOP record and then extended it again all in the space of a matter of days. Anderson came into the series with a record eight SCOOP titles on his online digital resume; now he has ten.

The former PocketFives #1, beat 335 entrants to win the $126,659 first prize in a $2,100 buy-in event, including Aaron Been in heads-up action. And then, barely 40-winks later, he was at it again, winning SCOOP title #10 after taking down the $1,050 Omaha Eight or Better title for a smidgen over $26,000. Anderson beat Sebastian Sikorski and Connor Drinan after the trio carved up the prize pool in a three-way deal.

Sikorski “p0cket00” is one of nine people to have ever crossed the $10m in online poker MTT winnings, and this week, Sweden’s Niklas “lena900” Astedt joined the exclusive club after taking down a $530+R NLHE SCOOP event after besting a field of 391 to secure the $102,115.24 first prize.

lena900 and his compatriot Simon “C Darwin2” Mattsson are currently locked in a friendly $100k SCOOP/POWERFEST wager to have a better double series than the duo of Patrick “pads1161” Leonard, and the German crusher bencb789. As you can see below (pads1161 comes close), it’s going to be an exciting battle.

Another hero of the online felt who is bagging SCOOP titles like vegans bag Whole Foods avocados is Roman “Rome0pro” Romanovskiy, and that’s good news for charity.

Romanovsky is a member of Raising for Effective Giving (REG), so there will be a decent wedge of cash ending up in the coffers of the meta-charity this week.

The Ukrainian has picked up two SCOOP titles and was runner-up to Andras Nemeth in the $25k High Roller. Romanovskiy beat 728 players in only the second event to earn $123,935 in prize money and followed that up by beating Patrick “pads1161′ Leonard in heads-up action in Event #16 for another $135,121.47 after the pair chopped the money and played for the title. Calvin Anderson finished fourth in that one.