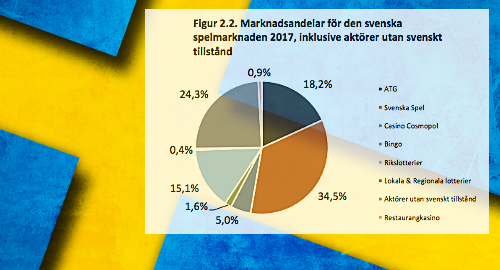 The average Swedish adult spent about 2.2% of their disposable income (SEK6,005, roughly $700) on gambling last year, slightly less than the 2.4% (SEK6,062) they spent on gambling in 2016. Only the international sites reported a per capita spending rise last year.

Sweden is in the process of liberalizing its online gambling market, with interested operators having been invited to submit license applications later this summer ahead of the rollout of the new regime in the new year.

SWEDISH ONLINE CASINO MARKETING DELUGE
Meanwhile, a local media outlet recently conducted an investigation into the marketing practices of Swedish-facing online gambling sites. The Resumé outlet signed up accounts with 13 internationally licensed online casinos along with Svenska Spel (as a control group), made deposits and gambled regularly in order to gauge the responses of the sites.

Over the next 25 days, Resumé reported receiving 144 communications via email, texts and other instant messaging services, along with ‘pushnotes’ in browser applications. The first day saw 22 messages issued by the 13 sites.

After closing all 13 online casino accounts at the end of the 25-day experiment, Resumé reported that it continued to receive communications from some of the sites, with Multilotto again outpacing all competitors.