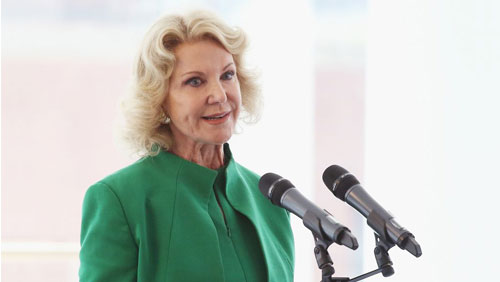 Elaine Wynn’s bid to clean house continues. Following the exit of her former husband, Steve, as CEO of the casino giant, Wynn was given back her voting power, and she’s not afraid to wield it. She has already said she wants new blood on the board, and is now challenging shareholders to not vote for director candidate John J. Hagenbuch.

Hagenbuch is a director of Wynn Resorts who is up for re-election on May 16. He is also the executive chairman and co-founder of Westland Capital Partners. In a letter addressed to all Wynn shareholders, Elaine Wynn made another request—this time for them to withhold their votes for Hagenbuch in the upcoming election in May.

Elaine Wynn, currently the largest shareholder of Wynn Resorts with 9.24% of outstanding shares, said she’s “deeply concerned” by “the lack of independence and responsible oversight demonstrated by the current board of directors.” Specifically, Wynn is concerned about the casino company’s “most senior leadership,” which is why she says she’s “seeking to reconstitute the board and reform the company’s corporate governance.”

Wynn continued by expressing her distaste of the current “legacy directors” that have too much influence over the company, in particular Hagenbuch. She adds, “This is why today I am launching a “Withhold-the-Vote” campaign against John J. Hagenbuch. I urge you to join me in this effort.”

The overall tone of the letter certainly gives the impression that she won’t be happy until all of the old directors are removed. She wants to see a “New Wynn” that will eventually have younger members on the board, with fresh ideas and a new perspective not reminiscent of the old board.

According to Wynn corporate guidelines, any director who doesn’t receive more than 50% of the votes in his or her favor during an uncontested election must tender his or her resignation within five days of the vote. Wynn said, “If my proxy solicitation results in Mr. Hagenbuch’s failure to receive over 50% of the votes cast for his election, then I believe the failure of the board to accept his resignation would be an egregious violation of proper corporate governance and in direct opposition to a clear shareholder directive.”

The infighting will certainly continue between the old board and Wynn. There has been strong evidence to support a corporate coup d’état, and it’s going to be very interesting to see how things play out.