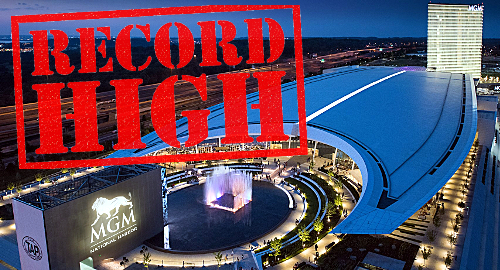 Maryland’s casinos smashed their previous revenue record in the month of March, while its leading property also set a new personal best for the market.

On Thursday, the Maryland Lottery and Gaming Agency reported that the state’s six casinos generated revenue of just over $150m in March, up 6.3% from March 2017’s total and easily eclipsing the market’s previous high-water mark of $141.2m, which was also set in March 2017.

Interestingly, the UK’s Daily Mail media outlet reported that John McEntee, a longtime personal aide to U.S. President Donald Trump, was a major gambling whale at National Harbor. McEntee was unceremoniously turfed from the White House last month amid reports that his gambling habits made him a potential security risk.

At the time, McEntee’s problems were credited to his use of unspecified online gambling sites, but the Mail reported that he was a roulette junkie who wagered up to $4k per spin. McEntee reportedly lost around $250k in 2017 playing at National Harbor, which is pretty extreme considering his annual salary was only $115k. In proximity terms, National Harbor is the closest casino to the White House, making it the perfect getaway after devoting several hours to wind-proofing Trump’s hair.

Cordish Gaming’s Live! Casino once again played revenue runner-up in March, earning $47m, a modest 1% year-on-year rise. In related news, last month saw Cordish officially throw in the towel on its plans to build a €3b integrated resort near Madrid, which came to naught when local officials refused to grant the project some desired tax and zoning concessions.

At the time, Cordish vowed to sue Madrid’s regional government, but claimed it would continue to make payments on the 92-hectare parcel of land on which the resort was to be built. However, last month saw local media report that Cordish had returned the property to its original owners, foregoing the need to make future payments but surrendering the money Cordish had paid up to that point.

Finishing our March revenue report, Caesars Entertainment’s Horseshoe Casino Baltimore was the month’s lone decliner, with revenue falling 7.8% year-on-year to $24.8m. Hollywood Casino Perryville improved 2.4% to $7.1m, Ocean Downs shot up 26.2% to $5.9m (thanks to the recent addition of its first table games) and Rocky Gap was up 0.5% to $4.7m.