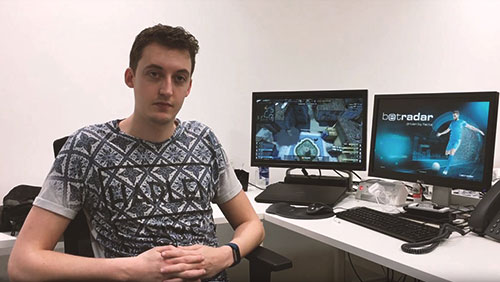 Sportradar’s Head of Esports, James Watson, has left his position by agreement after an internal investigation proved he broke his contract by betting on esports matches at Unikrn.

My boy is trying to find a part-time job as he continues to do his A-Levels. Nothing. In a bid, to covertly get him to pull his finger out of his hairy arse, I suggested that he and I have a little wager on who can get 100 rejection letters first. Him with his job hunt, and me in my role as a podcast host.

All of them have told me how busy they are petting Beagles, cleaning baby rash, and all of manner of excuses.

My boy is woefully behind.

I am going to suggest that he applies for the position of Head of Esports for Sportradar. After all, the job opened up this morning.

Why James Watson’s Favourite Animal is Not a Unikrn

It’s excruciating in so many ways.

Harris, who recently switched his format to share the audio of his live tours, took a detour this week to talk about the pressure he is feeling because of the vitriol he is receiving on social media and how it affects his life.

Social media is a bloodbath.

The perfect breeding ground for gutless wankers who have nothing better to do than to grab hold of someone’s reputation, and start hacking away at the carotid artery with their keyboard.

Paradoxically, it also acts as the perfect realm to enact swift change, particularly when it comes to issues of shady fucking behaviour. And the creator of the esports betting machine, Unikrn, used it to significant effect this week (unless your name is James Watson).

In mid-March, Rahul Sood sent a tweet to Sportradar (and his 39,000 followers) that goes a little something like this:

Head of #Esports at @Sportradar visits our Discord, was busted for using multiple accounts manipulating others while betting aggressively on our site, & he often publicly bashes us.

Then he blocks me after I call him out. Sportradar is this the integrity you want to portray? pic.twitter.com/vgW1DT2Qqs

And consider the irony of the allegations.

Sportradar is a sports data analytical beast that has over 30 offices in 20 countries, and puts ‘Integrity’ front and centre at the head of it’s core values. As the Sportradar website states:

“Sportradar Integrity Services is the world’s leading supplier of monitoring, intelligence, education and consultancy solutions to sports federations, leagues, clubs and state authorities to support them in the fight against betting-related, match-fixing and corruption.”

Amonst those ‘sports’ is esports, and James Watson (the accused) is the Head of Sportradar’s esports division.

1. Did Watson place bets with Unikrn?
2. Did he use priviliged information to make those bets?

Sportradar issued a statement on Tuesday clearing their name and putting Watson out to pasture.

Yes, Watson did place a series of ‘low-level’ bets with Unikrn, but he didn’t use ‘priviliged’ information gleaned in his role, nor did he manipulate pricing for the purposes of betting.

Sportradar are also a member of the Esports Integrity Coalition (ESIC), and their commisioner, Ian Smith, also had a role in the investigation and reassured Sportradar’s partners that the companies integrity has not been compromised following Watson’s actions.

So, it seems that all Watson did w,as have a small flutter on a match?

Unfortunately, his contract specifically states that to do so is a sackable offence.

All is not lost, James.