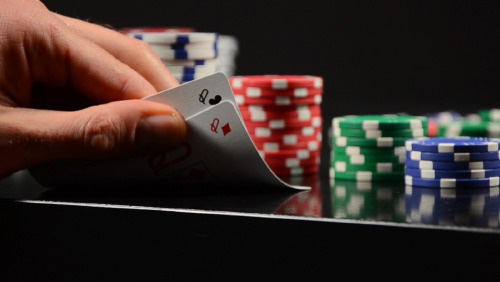 Lee Davy shares his opinion on why there are so few female poker players competing in high stakes tournaments, and the World Poker Tour smash the Women in Poker Hall of Fame shortlist with three employees making the cut.


Like a bat slowly dying in a swimming pool after swooping in for a sip, I’m struggling with this one.

There is no structure.

But I do have a theme.

There is only one woman – Jennifer Tilly.

The $300,000 buy-in Super High Roller Bowl is the ultimate tournament for High Stakes Poker. Last month, 62 players registered for the event, and Kathy Lehne was the only female to pony up the $30,000 deposit (she will play after winning a seat in the live lottery).

The lack of female players is not limited to tournaments carrying the words “Super” and “High” in the title. Only Vanessa Selbst has competed in the $1m buy-in Big One for One Drop, and very few have appeared in the One Drop High Roller. The big buy-in events at the Aria contain very few females, and the same is true of the action at the Triton Super Series and other Asian big buy-in events.

I know more males are playing professional poker, so there should be a disparity, but the failure of the very best female poker players to break into the higher echelon of poker tournaments is something worth talking about over a cup of green tea.

And, anyway, I have a theory.

These are leaders; people who dare to be magnificent and have confidence in their beliefs. Magnificent leaders who imbue confidence are attractive. Who isn’t attracted to that type of energy?

A tribe, like the Germans, can share intellect, technology and philosophy, therefore, increasing their rate of growth. There is also the emotional stability that comes with a tribe, and the ability to share financial burdens.

On the weekend, I went for a run into Cardiff City Centre. As I made my way down Cathedral Road, it was apparent that there was an event in the Principality Stadium. Gangs of young men filled the streets. And these gangs were either black, white or Asian (none of them was mixed). I later learned that Anthony Joshua unified the WBA, IBF and WBO Boxing World Championships after beating Joseph Parker. Joshua is black. Parker is white.

Women team up with women.

Men team up with men.

Nerds team up with nerds.

Jocks team up with jocks.

Idiots team up with idiots.

What makes poker so amazing is the ability to break down cultural barriers. You will see people of all races, gender and what-not befriending each other. But there are still biases, and one of them is the fact that groups of male poker players will flock together.

The females are in a bit of a spot, because there aren’t that many of them to flock together. Meaning that the women tend to join male tribes, join a smaller female tribe,

or go it alone.

The majority of top professional poker players are male meaning the likelihood that a female player will break through and become a regular at the $100k level is slim to none?

I don’t have a smart-ass answer.

It is what it is.

An opinion, that we are never likely to see a group of female poker players competing in the highest stakes games because evolutionary biology is working against them.

The Nominations for the Women in Poker Hall of Fame (WiPHOF)

The shortlist for the Class of 2018 Women in Poker Hall of Fame (WiPHOF) has reached the interwebs courtesy of Linda Johnson’s Twitter feed.

The First Lady of Poker revealed 11 potential candidates, and with only two likely to make the cut, that means nine are going to feel pretty cool today, and not so cool in the coming weeks.

At the beginning of March, I covered the nomination process here where I shared by bias towards Jennifer Tilly, Maria Ho, Kara Scott and Haley Hintze (I eventually voted for Ho, Scott and Hintze). All four made the shortlist.

There is already a big winner here in the shape of the World Poker Tour (WPT). In an article that opines on the difficulties female poker players have to climb to the top rungs of the poker ladder, I am fully aware of the challenge women face to reach the high-end positions within poker but outside of the tables. One company that excels when it comes to promoting women to the top is the WPT.

Representing the WPT in the shortlist are:

Blum is General Manager for WPT Europe who in 2015 won the European Poker Award for Industry Person of the Year. Glogow is a producer responsible for creating the WPT TV Show (a gateway drug for so many people). Hael is the WPT Vice-President.

Next, a specially formed media group and the current WiPHOF members will select two, and as you can see, it’s not an easy choice.