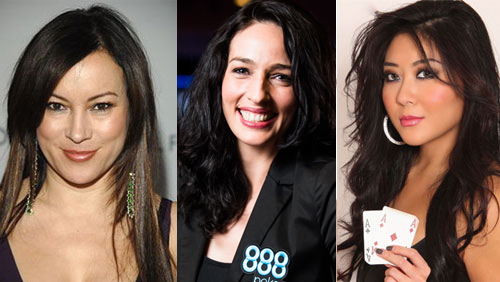 Nominations for the Women in Poker Hall of Fame Class of 2018 are open to the general public, and I vouch for Jennifer Tilly, Kara Scott, Maria Ho and Haley Hintze.


Jordan Peterson is becoming one of the most talked about people in the world, right now. Then again, I doubt the podcast noise that creates my worldview, is the view of the world. He would make a cracking Count Dracula, but that’s irrelevant.

His interview with the Channel 4 journalist Cathy Freeman has been viewed 7.8m times with 227k thumbs up and only 6k thumbs down. It’s a car crash with Freeman hellbent on imposing her view that he pisses on the matriarchy – a move that led to death threats by some viewers who have apparently gone mad eating too many tins of butter beans.

For me, the interview showed one thing.

The debate on gender equality is as complicated as ever.

Reading a 2017 report from the World Economic Forum when it comes to the parity of pay between the sexes both the US and the UK have gone backwards, not forwards as one would suspect with humanity being all modern and that.

The level playing field where men and women can have equal pay if they’re good enough. But that’s not entirely true, is it? If you’re a woman, there are far more obstacles in your way to becoming the next Phillipa Ivey.

And it’s for that reason that these 15 women deserve a beautifully cooked poached egg on toast.

The Women in Poker Hall of Fame (WiPHOF)

The Women in Poker Hall of Fame (WiPHOF) began life in 2008 as a way of recognising the achievements of women in poker. The opening salvo was to induct four outstanding females. Three more arrived each year for the following three years, and then a change in format.

The WiPHOF began honouring female poker players biennially with two getting a high heel through the door on each occasion. There are 19 current members, and that’s the list.

The nomination process for the Class of 2018 has begun. Click on this link to have your say. Anyone can vote, and you get three selections. The deadline is midnight PST March 15, 2018.

Here are the criteria
1. A candidate must have been active as a player or industry leader for a minimum of 10 years prior to election and 35 yrs of age or older.
2. Player/industry leader must have contributed to the world of poker in some significant way. This person can qualify by either winning major poker tournaments, or by making significant contributions to the industry of poker.
3. Player/industry leader must be a proponent of women in poker.
4. All nominees must be approved by a committee of the WiPHoF Committee and the Inductees.
5. Nominees must agree to terms & conditions of the Women in Poker Hall of Fame.

The process is a simple one.

The world has their say. The WiPHOF Committee and the Inductees make sure those that make the short list meet the criteria, and a panel of media & industry professionals and WiPHOF members select the next two members.

I am at a disadvantage when it comes to these sorts of things. The rich history of American poker lore eludes me and taking a look at the list; it’s very North American centric (much like the gender equal Hall of Fame).

So I am likely to get this punt wrong, but who cares, I’m going to share my words of wisdom anyway.

On the playing side, I believe Jennifer Tilly and Maria Ho deserve a shout. The cameras have gazed at these two over the past decade as they competed in the highest stakes games in the business. They both do a great job of promoting poker; Tilly with her Hollywood celebrity blood, and Ho with her constant appearances in a variety of different roles within the game and beyond.

Outside of the playing side of things, I’d like to mention the work of Kara Scott and Haley Hintze. Scott’s not a bad poker player either, but it’s her work as the figurehead of poker when exposed to the mass media that gives her the nod. Hintze has worked tirelessly for over a decade unearthing the truth about poker, and given that she no doubt does it out of her love for the game, and not her Bill Gates type poker salary, then respect is due.

We will have to wait until Tuesday, June 26th, 2018 at Orlean’s Casino in Las Vegas to find out how wide off the mark I am.