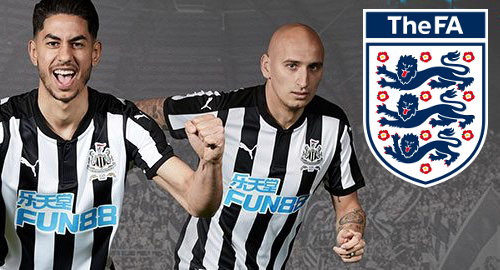 Online gambling operator Fun88‘s sponsorship of Newcastle United FC has resulted in charges being filed against the club by the English Football Association.

Back in January, the UK-licensed, Asian-facing Fun88 was one of several online betting operators singled out for scorn in what was at the time just the latest Sunday Times exposé of gambling companies undermining the very pillars on which society rests.

The Times claimed companies like Betway, Letou and Fun88, which had shirt sponsorships with various Premier League football clubs, were also allowing their gambling logos to appear on the jerseys of these clubs’ under-18 teams.

Fun88, which is part of the Isle of Man-based TGP Europe family of online gambling sites, currently has its logo adorning the jerseys of Newcastle United FC, inking the biggest sponsorship deal in the club’s history in January 2017.

Newcastle responded to the Times report by promising that the youth team would never again appear in public wearing the offending kit. The team also took down all images of the under-18 kit from the club’s website and promised to shoot new images of happy youths wearing happy clothing with no gambling imagery in sight. But Newcastle’s swift response appears to have a case of too little, too late.

On Tuesday, the BBC reported that the Football Association had charged Newcastle United with violating the FA’s kit and advertising regulations, which prohibit the promotion of “services and related activities such as alcohol and gambling” on apparel worn by its members’ under-18 squads.

The club has been given until March 27 to formulate a response to the FA’s charge, and they better come up with something other than calling the FA the No Fun(88) Police. Last June, the FA scrapped its title sponsorship deal with UK bookies Ladbrokes just one year into a four-year deal after accidentally developing a conscience.