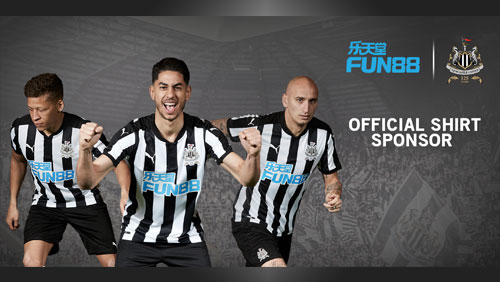 LONDON, ENGLAND (May 2017) – FUN88 is delighted to announce a three-year partnership with Newcastle United as the Magpies’ official shirt partner in the Club’s first season back in the Premier League following their Championship title win.

FUN88’s logo will be featured across the club’s famous black and white striped shirt in what will be a historic year, as Newcastle United celebrate their 125th Anniversary. The brand will be given access to advertise within St. James’ Park stadium at the Club’s home matches and across online and social media channels in the UK and internationally.

Working together with Newcastle United, FUN88 will be given a chance to build strong relationships with the ‘Toon Army’ fans in Newcastle and globally. In celebration of signing the partnership, Newcastle United will be launching three new social media channels in Asia – WeChat, Weibo & Dongqiudi – targeting the Premier League’s biggest international fanbase in China with all the latest club news and exclusive content.

FUN88 is a leading online gaming company with a large international following that offers sports betting and live casinos, which are both available in multiple languages. They have been nominated for various awards including Asian Operator of the Year at the prestigious EGR Awards in 2009.

Lee Charnley, Managing Director at Newcastle United, said: “It was important for us to find the right partner and in FUN88, we have a shirt sponsor that understands the club and brings significant benefits commercially. The relationship will enable the club and FUN88 to enhance our respective global profiles together as we celebrate a landmark season and embark on the exciting Premier League campaign ahead.”

Nathan Walker, Director at FUN88 commented: “It’s a hugely exciting time to partner with one of the most famous clubs in English football, Newcastle United. Our previous sponsorships in English football have delivered great results for the brand and I’m certain Newcastle United will provide FUN88 with the platform to move to new heights. We are looking forward to engaging with the Club’s huge fanbase – both in the city of Newcastle and worldwide. We’re excited about the next three years and are looking forward to the 2017-18 Premier League season.”

FUN88, founded in 2008, is an online gaming company with a large international following that offers sports betting, live casinos, slots and keno games, all of which are available in multiple languages.

The online gaming brand has been nominated for various awards including Asian Operator of the Year at the prestigious EGR Awards in 2009.

Previously, FUN88 was the shirt sponsor of Burnley FC and is currently the Official Betting Partner in Asian and Latin America of Tottenham Hotspur. FUN88 is operated in the United Kingdom by TGP (Europe) Ltd licensed by the Gambling Commission of Great Britain.

Is the Premier League on course for another sportsbetting surprise season?
Paul Seaton
9 November 2020
.