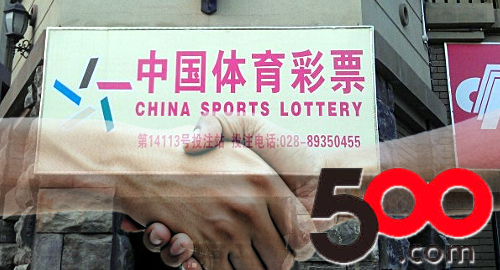 On Tuesday, the Shenzhen-based, Nasdaq-listed 500.com announced a deal to cooperate with the China Sports Lottery Administration Center on the development of “physical channels to sell sports lottery tickets.”

With the national Sports Lottery overseer’s support, 500.com plans to enter into deals with provincial sports lottery centers to install and maintain lottery terminals “to enhance the convenience of sports lottery ticket purchases, enlarge customer base and optimize user experience for lottery purchasers.”

Until March 2015, 500.com was one of only two companies approved by Chinese authorities to participate in a “pilot program’ for online lottery sales. But Beijing imposed a “temporary suspension” of online sales three years ago after national audits exposed widespread fraud at provincial lottery administration centers.

While Chinese media has occasionally hinted that the online suspension was due to be lifted, no formal steps have been taken to alter the status quo. In the interim, 500.com has been forced to pursue other business ventures in order to generate some badly needed revenue.

One of those new revenue streams came in late-2016, when 500.com acquired a majority stake in the social poker operations of Qufan Internet Technology Inc. and Shenzhen Qufan Internet Technology Co. Ltd. However, 500.com announced last month that it had disposed of its Qufan holdings for RMB127.5m (US$20.2m), a modest premium on the RMB110.5m the company paid for the stake.

500.com’s other recent acquisitions include a minority stake in Melco LottVentures Holdings Ltd and a controlling stake in Nordic-facing online gambling operator Multilotto.com.

Meanwhile, China’s Ministry of Finance reported overall lottery sales surging 31.4% to RMB38.3b ($6.07b) in February. Welfare Lottery sales improved 19.3% to RMB19.3b while the sports lottery segment shot up 46.7% to RMB19b. The Ministry credited the surge in part to a low comparison base from February 2017’s results.