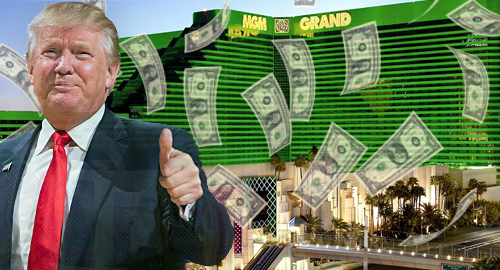 Casino operator MGM Resorts is singing Donald Trump’s praises after a $1.4b tax break allowed the company to mask a year-on-year profit decline.

On Tuesday, MGM released its Q4 earnings report, which showed overall revenue rising 5.7% to $2.6b in the three months ending December 31. Operating income declined over one-fifth to $223m while net income hit $1.4b versus just $24.7m in the same period one year earlier.

However, that profit gain came courtesy of the Washington tax reforms approved last year, which gave MGM a $1.43b non-cash income tax benefit, boosting earnings per share to $2.42. Without that windfall, the earnings gain would have less than a penny per share.

Domestic resorts revenue improved 5% year-on-year to $1.9m in Q4. However, excluding contributions from the new MGM National Harbor venue in Maryland, domestic revenue was down 3% as overall slots handle, table drop and revenue-per-available-room all declined.

National Harbor booked revenue of $186.9m in Q4, good enough for fourth on the domestic resorts revenue chart, behind only the Bellagio and MGM Grand in Las Vegas and the Borgata in Atlantic City. The Mandalay Bay resort ranked fifth, but its Q4 was dealing with issues that National Harbor didn’t face.

The overall Q4 numbers were affected by the mass shooting on the Vegas Strip in early October, during which the shooter held up in Mandalay Bay. Occupancy rates at MGM’s Vegas properties fell four points to 85% during Q4, reflecting the upheaval MGM has been forced to contend with since the shooting.

Speaking to analysts, MGM CEO Jim Murren said the Q4 results were undoubtedly affected by the “clear challenges” presented by the shooting’s aftermath, but said the overall results had been “a touch better” than the company had anticipated.

MGM China had a more positive outcome, with revenue in Macau up 10% to $549m. However, a deferred tax liability pushed operating income down to $43m from $72m one year earlier.

The new MGM Cotai property opened last week, just in time for the Lunar New Year celebrations, and while MGM China CEO Grant Bowie called it “a challenging time to make any judgments,” he was encouraged by the new venue’s mass table win per unit per day.

Bowie noted that the property was enjoying a lot of lookie-loos from New Year’s revelers, leaving him to wonder “how do I monetize people taking photographs.” However, Bowie said he expects many of those photos to end up on social media, thereby increasing the new venue’s exposure.

MGM Cotai opened with only direct VIP gaming activity but Bowie said the plan was to launch junket-based VIP action by June or July. The Mansion, the new venue’s high-end accommodation, is expected to open by September in what Murren called the “last piece of the puzzle for us to lock in.”

Murren also referenced the imminent sports betting ruling by the US Supreme Court, an opportunity for which he claimed MGM was “really poised to immediately take advantage of.” Murren said sports would be “a significant avenue of growth” for MGM in the future, in part due to the new Las Vegas Golden Knights franchise, which appears set to make the NHL playoffs this spring.