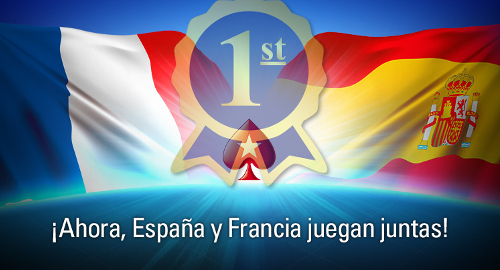 The Stars Group’s flagship PokerStars brand has become the first operator to offer shared liquidity between its French- and Spanish-licensed sites.

Just one day after Spain published its liquidity-sharing rules in the Official State Gazette, PokerStars announced that its PokerStars.es and PokerStars.fr players could now match wits and bankrolls across their shared national border.

Stars Interactive Group CEOO Guy Templer called the new shared reality “great for players and great for the poker category.” Templer praised gaming regulators in France and Spain for doing “an excellent job in enabling a dramatic improvement in the gaming experience in their jurisdictions.”

PokerStars is seeking to capitalize on its first-mover liquidity advantage via a new €5m guaranteed France Espania Hold’Em (FRESH) series starting January 28. There are also new daily tournaments featuring guarantees up to €20k, and new boosts to the Stars Rewards loyalty program.

Portugal has been quiet on its own progress toward launching shared liquidity, while Italy appears to be having second thoughts about the whole process. Some Italian senators have spouted tired memes about facilitating cross-border money laundering, while Italian operators such as Lottomatica think liquidity sharing will offer benefit only to international firms such as PokerStars.

JDIGITAL HAILS LIQUIDITY AS POKER SAVIOR
Mikel López de Torre, who this month was appointed the new president of Spanish gaming association JDigital, issued a statement on Tuesday saying he expects liquidity-sharing will allow poker to once again become “one of the locomotives” of Spain’s online gambling sector.

De Torre noted that in 2011 – the year before Spain’s regulated online gambling market launched – Spain’s online poker market generated annual revenue of over €100m, but this sum has steadily fallen ever since, sinking to an estimated €60m in 2017.

De Torre believes that shared liquidity will give Spain’s online poker market the momentum it needs to once again top the €100m revenue mark by 2019. To assist this goal, De Torre reiterated JDigital’s perennial call for Spain’s government to rethink its high taxation of Spain’s online gambling sector.