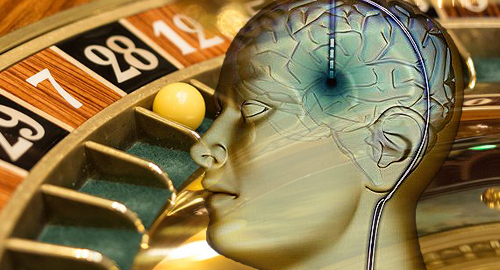 Researchers have identified signals in the brain that predict impulsive behavior before it occurs, raising the possibility that targeted electrical stimulation could reduce or eliminate problem gambling activity.

On Monday, the Proceedings of the National Academy of Sciences (PNAS) published the findings of a Stanford University School of Medicine study that identified “a real-time biomarker for impulsive behavior,” according to Casey Halpern, MD, the study’s senior author.

The researchers identified this marker by introducing a new high-fat food pellet into the diets of mice, then giving the mice a one-hour window per day in which they could eat all the high-fat pellets they wanted. In time, the mice were spending the entire hour gorging themselves on the tasty treat.

Using implanted electrode arrays in the mice brains, the researchers detected heightened electrical activity in the nucleus accumbens – a key player in the brain’s reward circuitry – immediately before the mice began their daily one-hour binge-fest. Similar reactions weren’t evident when the mice were presented with their normal food supply.

The researchers rejigged their arrays to deliver a 10-second pulse of electrical current to the same area of the mice brains whenever those impulsive biomarkers appeared. The mice then significantly reduced their junk food binges without any other adverse affects.

The researchers then repeated their experiment on a human volunteer with obsessive-compulsive disorder. The human was then put through a series of computerized tasks, the successful completion of which resulted in cash rewards for the participant. Once programmed to expect these rewards, the human’s brain showed the same type of electrical stimulation as the mice.

The researchers concluded that the replication of this same phenomenon in both mice and humans indicates that this biomarker may be common to all sorts of impulsive behaviors, which could lead to a universal treatment.

Deep-brain stimulation (DBS) is already approved in the US for treating Parkinson’s disease, but the DBS devices currently in use can only provide stimulation according to a pre-programmed schedule. The hope is that more selective applications from so-called responsive neurostimulation devices will be able to provide more targeted pulses.

This latest research builds on previous studies that identified differences in the brains of problem gamblers versus non-problem gamblers, including assessing and adapting to risky situations, anticipating rewards, responding to gambling imagery, endorphin production and cognitive distortion.