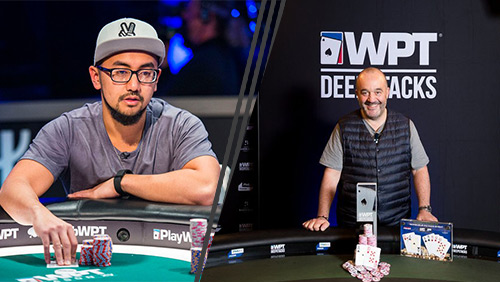 Is there a God?

Is there such a thing as spirituality, or a universal presence that provides us with everything we need, if we ask for it?

I don’t know, but I do know this, whatever Ryan Tosoc does to create synchronicity into his life, it’s a path worth following.

The net effect of this unbelievable accomplishment is over $3m in prize money secured through two events. It’s no wonder the lad told WPT officials that it all felt like a bit of a dream when he eventually beat Alex Foxen to join the likes of Daniel Negreanu, Gus Hansen, and Antonio Esfandiari as a champion of this incredible event.

It’s been a cracking few weeks for the WPT and the Bellagio. Dan Smith beat Negreanu in heads-up action to secure a seven-figure payday in the $100,000 Super High Roller. Jason Koon, Rainer Kempe, and Stefan Schillhabel took down $25k events, and the likes of Chris Moorman, Kristen Bicknell and Steve Silverman took down side events.

But this was the one.

812 entrants (surpassing the 791 record of last year) created the largest prize pool in this event’s history, and the winner was going to take home a few Snickers bar less than $2m.

It was a turnout that stuck two fingers into the faces of those criticising the decision by the WPT and the Bellagio to make the event ‘Unlimited Re-Entry.’ Twitter polls mean nothing. When the players vote with their arses on seats, there’s no way these rules are changing anytime soon.

Mike Del Vecchio was the only man who made the final table with a map of how to get his mitts on a WPT Champions Trophy after beating 421 entrants to take the $284,638 first prize at Rolling Thunder last season. Tosoc had most of the pieces after finishing runner-up to James Romero at the Bellagio last year.

And yet, despite the confidence he must have felt surging through his body as he ploughed through levels like a John Deere ploughs through a potato field, he wasn’t taking anything for granted.

“The only time like I felt like I was going to win was when I was all in with queen-ten. I just felt that jack coming.” Said Tosoc reliving the final hand that saw him make broadway on the turn after coming from behind with QT v the AT of Foxen.

The WPT Main Event next appears in Berlin for the European Championships, Jan 5-15 at the Spielbank Casino.

Frenchman, Bruno Benveniste, has won the first major tournament of his part-time poker playing career, after topping a field of 421 entrants to win the PMU.fr sponsored WPTDeepStacks event in Deauville.

Benveniste overcame a difficult final table housing the likes of Tobias Peters and Ekrem Sanioglu, but it was Sandro Pitzanti who would provide the final hurdle during the heads-up action. Pitzanti came into the final table buoyed by his runner-up finish to Michael Mrakeš during the €1,100 buy-in partypoker Million Germany in the summer, but he had to settle for the bridesmaid role for the second time this year.

The next WPTDeepStacks event takes place as part of the WPT European Championships in Berlin.