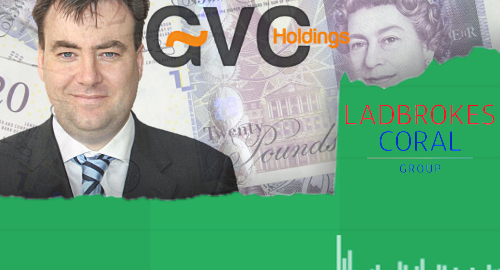 On Thursday, GVC announced that its board of directors and their counterparts at Lads Coral were engaged in “detailed discussions regarding the possible combination of the two businesses” after GVC submitted its latest proposal to acquire Lads Coral’s entire share capital.

A further value of up to 42.8p would be structured as a contingent value right (CVR) dependent on how severe the UK government plans to restrict the use of fixed-odds betting terminals in Lads Coral betting shops.

Assuming all proceeds as planned, GVC anticipates that its shareholders would end up holding 53.5% of the enlarged entity, with Lads Coral shareholders holding the rest. The parties have agreed that GVC CEO Kenny Alexander (pictured) would head up the enlarged group, with the rest of senior management roles to be decided over the next few weeks.

Lads Coral investors hailed the news, as the company’s shares were up nearly one-third to 178p at time of writing. GVC’s shares are up a more modest 6.6% to 966p. UK takeover rules require GVC to announce by January 4 whether it plans to make a firm offer for Lads Coral.

This is GVC’s latest attempt at a Lads Coral takeover, with the most recent effort having fallen apart in August, reportedly due to concerns over GVC’s exposure to grey- and black-markets, including Turkey. GVC eliminated that obstacle last month via the sale of its Turkish-facing business.

GVC said the addition of Lads Coral’s operations would boost its share of revenue from regulated online markets to nearly 90%, which would eliminate much of the uncertainty surrounding the company’s future in some of these regulatory iffy markets (although GVC’s flagship betting brand Bwin is particularly reliant on its operations in legally sketchy Germany).

A union of this magnitude would necessitate significant staff reductions, or ‘synergies’ as they’re known to the people not headed for the exits with the photos of their loved ones in a banker’s box. Staffers at both companies are likely reducing their Christmas shopping budgets as we speak.

GVC has a good track record with mega-deals, having successfully turned around the underperforming Bwin.party digital entertainment brands after acquiring the group a couple years ago. But that deal involved only online gambling companies, while Lads Coral has a significant retail presence, an area in which GVC has little experience.

It also remains to be seen what a GVC-Lads Coral union would mean for gambling tech provider Playtech, which has years left on its deal to power Lads Coral’s online and retail gaming ops. Playtech shares are currently down 3% on the day.