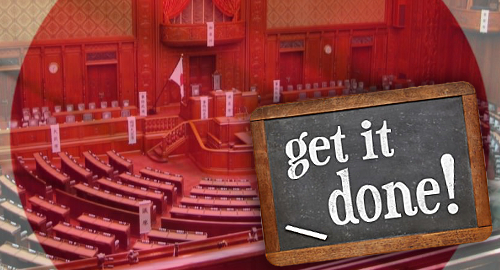 Japan’s ruling coalition is pressing legislators to approve a gambling addiction bill before they head home for their winter break.

On Friday, Prime Minister Shinzo Abe’s ruling Liberal Democratic Party (LDP) and its coalition partner Komeito reintroduced a bill aimed to mitigate the potential social harms that could arise from the country’s plans to authorize casino gambling for the first time.

Japan passed casino enabling legislation in December 2016, setting up the need to pass the so-called Integrated Resorts (IR) Implementation bill sometime next year. A previous version of the gambling addiction bill, which is viewed as a necessary precursor to the IR bill’s passage, was submitted this summer but died on the order paper after Abe’s snap election call.

The bicameral Diet is scheduled to wrap up its 2017 affairs on December 9, but the LDP/Komeito faction hopes to get an assist from the Nippon Ishin no Kai party in the House of Representatives and get the gambling addiction bill to the floor for a vote before legislators head for the exits.

HO NO FAN OF JAPANESE SPEED DATING
Meanwhile, Lawrence Ho, CEO of Asian casino operator Melco Resorts & Entertainment (MRE), has shed more light on what led him to pledge to move his company’s corporate HQ from Hong Kong to Japan if its Japanese IR project, City of the Future, was lucky enough to win one of the highly coveted IR licenses.

In an interview with Reuters on Friday, Ho repeated his earlier claim that he “would personally move here while we are building [City of the Future], and we would move the core management team and headquarters here.” MRE has casino operations in Macau, Manila and an in-development project in Cyprus, but Ho emphasized that a Japan IR would be MRE’s “most important project outside Macau.”

Ho’s casino rivals, including Las Vegas Sands and MGM Resorts, have each pledged to spend up to $10b building their own Japanese IRs, and Ho has one-upped these pledges by vowing to outspend all comers in order to build a memorable and truly Japanese facility.

Japan is widely expected to require its casino licensees to enter into partnerships with local firms. Ho said MRE is keeping an open mind as to what level of ownership his group will be able to hold in any joint venture, and had already had “discussions with Japanese financial institutions that would be interested to be part of a financing group.”

Ho noted that MRE’s meetings with local officials and potential joint venture partners was “almost like ‘speed dating’ – sometimes we go into their offices and see our competitors in the waiting rooms.