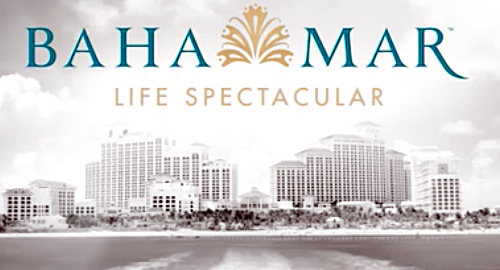 The Baha Mar integrated resort casino in the Bahamas is launching its first major marketing campaign ahead of the launch of its second hotel.

Baha Mar held its official grand opening on Wednesday, following the $4.2b property’s soft opening in April. Baha Mar Ltd’s marketing VP Karin Salinas called the official launch “a milestone day” and an opportunity to “really go on a grander scale to showcase Baha Mar to the rest of the world.”

The new ‘Life Spectacular’ campaign includes commercials featuring lots of imagery of people doing suitably spectacular stuff, like jumping off the wings of seaplanes into the blue Bahamian waters, along with – naturally – shots of people getting their gamble on in Baha Mar’s casino (a surreptitiously filmed video of which can be viewed at the bottom of this article).

Baha Mar opened with just one hotel – the 1,800-room Grand Hyatt – but the 299-room SLS Baha Mar is scheduled to open November 14. This will be the SLS chain’s first hotel in the Caribbean. A third hotel, the Rosewood Baha Mar, will open next spring, bringing the resort’s total number of rooms, suites and villas to over 2,300.

In July, Baha Mar Ltd claimed the property’s one hotel was currently running at only around 50% occupancy. On Thursday, the Bahamas Tribune quoted Tourism Minister Dionisio D’Aguilar saying Baha Mar’s occupancy rates were still “kind of low” but he hoped the new marketing campaign would goose the numbers.

D’Aguilar also claimed to be “anxious” about Baha Mar’s ability to boost its occupancy without cannibalizing other local hotels. D’Aguilar said the government had stressed that Baha Mar needed to “seek out new markets and new customers in order to grow the destination.”

Meanwhile, there’s still no word on whether Baha Mar’s ostensible owner, a division of Hong Kong conglomerate Chow Tai Fook Enterprises (CTFE), has formally assumed ownership of the property. CTFE was named as the buyer in April but the sale was conditional on Baha Mar’s principal contractor China Construction America (CCA) achieving “substantial completion” of the project by October 15.

CCA was blamed for many of the delays that plagued Baha Mar under its previous ownership, and CCA was signaling as early as July that it was likely to miss its latest deadline. Baha Mar Ltd has been silent on the status of CCA’s work, and the government has yet to confirm if the property has been issued its full certificate of occupancy.