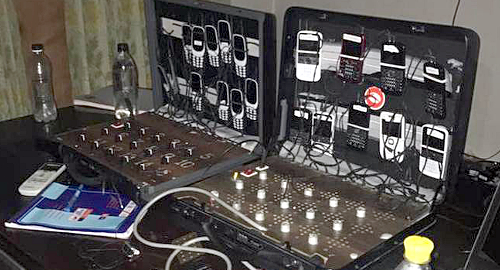 Authorities in India have busted what they’re calling one of the largest illegal cricket betting operations they’ve uncovered in recent years.

On Monday, Indian media outlets reported that police and Income Tax agents in the state of Harayan had rumbled a cricket betting ring operating out of a residential building in the city of Gurugram (Gurgaon). The operation also involved searches of buildings in Goa, Delhi, Noida and Kolkata that began on Friday.

Police recovered a variety of technical tools, including more of those ingenious bookie-in-a-briefcase set-ups (pictured) that allow operators to more easily shift most of their technology to new locations in case the cops close in. Except this time, the cops were apparently too fleet of foot to permit such a relocation.

Police reported that their investigation stemmed from an originally unrelated probe of unspecified Goa casino operators using the informal hawala money transfer system to facilitate high-value betting. Sources told The Hindu that this was “a new sector being searched for the first time.”

Police have reportedly uncovered a network of undocumented financial transfers through shell companies in Kolkata and Delhi, with apparent efforts to mask the ill-gotten gains through bogus arbitration orders. Police say they seized Rs 20m (US $308k) worth of cash and jewelry, while documenting more than Rs 1b ($15.4m) worth of suspect transactions.

India has struggled to contain betting activity by its sports-crazed citizens, while saner voices suggest that it would be far better for the country to legalize and regulate land-based and online betting, which would help reduce the type of match- and spot-fixing incidents that have plagued cricket in recent years.

The Law Commission of India (LCI), which has been tasked by the nation’s Supreme Court with studying the pros and cons of legal betting, has repeatedly solicited input from the nation’s cricket bodies.

But to date, most of the Board of Control for Cricket in India (BCCI) member associations have failed to heed the LCI’s request for input. Among those that have replied are the Saurashtra Cricket Association, which expressed opposition to legal betting, claiming it would only exacerbate the existing fixing problem while also encouraging “vice” and “other undesirable anti-social elements.”