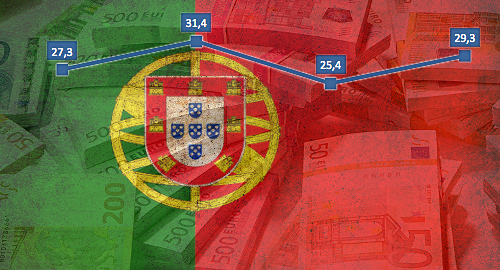 Portugal’s regulated online gambling market returned to growth in the third quarter after suffering its first ever sequential decline in Q2.

The Q3 total is 15.6% greater than the €25.4m the market generated in Q2 2017, which represented the first sequential revenue decline since Portugal launched its regulated market in June 2016. The Q3 figure is also 21.5% higher than the €24.1m the market reported in Q3 2016, its first full quarter of operations.

For the first nine months of 2017, total online gambling revenue stands at €86.3m, of which the government’s share came to €24.5m. Sports betting accounted for €47.7m of this total, representing roughly 55% of the overall market, with online casino (including online poker) contributed €38.4m.

The online casino vertical – again, which includes poker – generated revenue of €13.1m in Q3. While that’s a 15% rise over Q2’s figure, it’s less €800k less than the market generated in Q1. However, on a monthly basis, Q3’s online casino revenue was remarkably stable, with a range of between €4.2m and €4.4m, after soaring as high as €5.4m in January and sinking as low as €3.5m in June.

As of the end of Q3, there were seven companies licensed to operate in Portugal, seven of whom offered casino products while only four offer sports betting. The latest recipient was local betting operator A Nossa Aposta, which received an online slots license for its Nossaposta.pt site in late September. Local brick-and-mortar casino operator Solverde received its online casino license for Casinosolverde.pt a few weeks earlier.