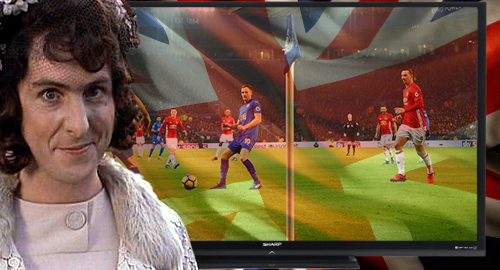 A new UK survey claims 95% of televised football matches contain at least one commercial for a gambling operator, and gambling adverts count for over one-third of some match advertising.

This weekend, the BBC Victoria Derbyshire show released the results of a study of advertising across 25 football matches broadcast via Sky Sports, BT Sport and ITV this season. The study found that 95% of these matches contained at least one bookmaker advert, while the average ratio of gambling adverts in these matches was one in five.

Despite commercial spots on English Premier League football broadcasts costing around £35k a pop, betting firms have been devoting ever larger slices of their marketing budget to the medium. Nielsen researchers said gambling firms spent £118.5m on TV promos in 2015 and this figure is said to have topped £150m in 2016.

Gambling operators expect to face tighter advertising restrictions when the UK government releases the results of its triennial review of the gambling industry next month. At present, gambling ads can’t air before the 9pm watershed, but there’s a carveout for live sports broadcasts. Anti-gambling campaigners are pressing for a blanket ban on daytime gambling adverts.

The release of the football survey followed just days after the UK Gambling Commission’s letter to its online gambling licensees instructing them to purge their websites of all ‘kid-friendly’ marketing material. The UK’s anti-gambling media promptly took a victory lap, and one can expect this ‘shame’ drumbeat to grow even louder in the days leading up to the release of the triennial review.

Meanwhile, the UK Labour Party’s efforts to establish its anti-gambling bona fides continued on Monday with MP Jo Stevens’ self-flagellating confession that her party goofed when it liberalized gambling laws back in 2007, which allowed gambling firms to advertise on the telly for the first time.

Stevens, who represents Wales’ Cardiff Central constituency, told the BBC that in 2007, “we didn’t really know what technology would bring to the gambling industry.” Stevens said the party now understood “that we did get it wrong but we’d like to have the opportunity, if we get back in government, to put it right.”

Labour has been using gambling as a convenient whipping boy to drum up party support in recent weeks, having called for betting operators to pay a mandatory levy to fund problem gambling treatment programs, while also calling for a ban on gambling operators being allowed to advertise on football jerseys.

Remote Gambling Association CEO Clive Hawkswood did his best to push back against Stevens’ claims, saying gambling was “normalized” in UK society, which he claimed was probably the result of “the introduction of the National Lottery, it changed the perception.”