The Philippine casino industry may have lost steam in the July to September 2017 period compared to the previous quarter.

International financial brokerage Morgan Stanley made this comment in a memo on Sunday as it forecast gross gaming revenues declining in the third quarter. The only consolation for investors is that the four integrated resorts in Manila will see higher revenues than the previous year. 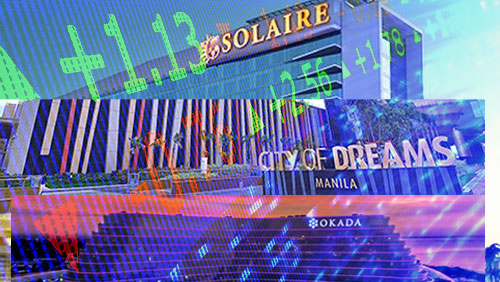 Casinos at Entertainment City include the Solaire Resort and Casino, operated by Bloomberry Resorts Corp; Melco (Philippines) Resorts Corp’s City of Dreams Manila; and Okada Manila of Tiger Resort Leisure and Entertainment Inc. A property by Travellers International Hotel Group Inc is expected to be completed by the fourth quarter of 2020. Travellers currently operates the Resorts World Manila casino property outside Entertainment City.

“Yet, year-on-year EBITDA growth of 27 percent for Bloomberry and 21 percent for Melco remain strong,” Analysts Alex Poon and Praveen Choudhary said in their Sunday memo, according to GGRAsia.

Expect earnings before interest, tax, depreciation, and amortization (EBITDA) of Bloomberry and Melco Resorts to drop 5 and 10 percent or an estimated PHP3.3 billion ($64.27 million) and PHP1.9 billion ($37 million), respectively, according to the investment analysts.

The culprit behind the decline in Bloomberry and Melco, according to Morgan Stanley, is falling VIP revenues.

In the case of Travellers, the investment company noted that it will post flat EBITDA in the third quarter from the 46 percent quarter-on-quarter rise in the second quarter 2017.

Travellers posted a PHP312.09 million ($6.09 million) net loss in second quarter of the year after it was forced to close Resorts World Manila’s gaming floor in the light of the June 2 arson attack that claimed 38 lives.

Moving forward, Travellers said that it plans to convert the area of the second floor affected by the arson attack into a retail zone.

“GGR could be down 9 percent quarter-on-quarter, mainly owing to removal of VIP and mass tables on second floor,” the analysts said.

The four integrated resorts are expected to bounce back in the fourth quarter, citing “stronger seasonality (Christmas), ramp up of Okada [Manila] (mainly VIP), and normalisation of VIP luck.”