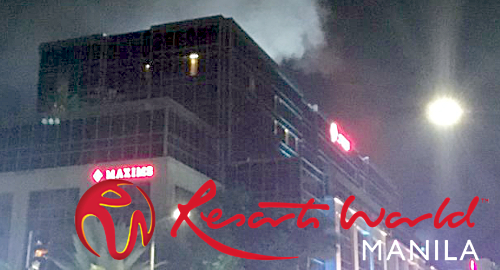 UPDATE: Police now say the lone gunman responsible for the attack has committed suicide by dousing himself in gasoline and burning himself in one of the property’s hotel rooms. Police say that the property has now been secured.

UPDATE: ISIS has claimed responsibility for the “lone wolf soldiers” who carried out the attack, but a Philippine National Police official said it was too early to connect the attack with terrorism and police hadn’t ruled out robbery as a motive for the attack.

PNP chief director general Ronald dela Rosa now says CCTV footage from inside the casino shows a “foreign-looking” Caucasian individual who they suspect is a robber. This suspect didn’t fire his weapon at any casino guests and “went straight to the casino chips storage room” after entering the premises. The suspect remains at large, but police have recovered a bag the suspect had filled with casino chips.

The original story appears below:

Masked gunmen are besieging the Resorts World Manila casino in the Philippines, in what early media reports are describing as a likely terrorist attack.

Explosions were also reportedly heard at the scene and thick smoke has been observed coming out of the building. A casino employee told DZMM Teleradyo that one of the gunmen had spread flammable liquid on some casino tables.

The gunmen reportedly began their assault on the property’s second floor, where the bulk of the casino’s gaming operations are located. Witnesses reported seeing gunmen searching the third floor, which houses many of the property’s VIP gambling rooms.

Local police, SWAT teams and emergency services have raced to the area, and while some hotel guests were observed being carried away on stretchers, the number of possible casualties remains unknown. The Manila Times quoted a member of the Philippine Red Cross saying at least 25 people had been rushed to nearby hospitals. Some of the injured reportedly jumped from the property’s second floor to escape the gunmen.

The Philippine army recently launched a coordinated campaign in the southern portion of the country against a terrorist group aligned with the Islamic State. The terrorists had taken control of most of the city of Marawi late last month, prompting President Rodrigo Duterte to order the army in to reclaim the territory.

This is a developing story. Check back for updates.