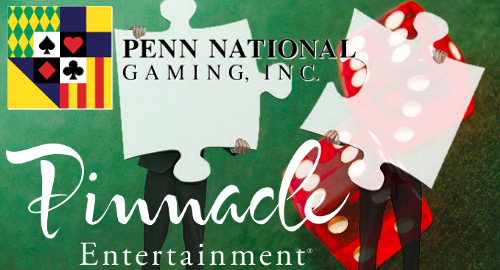 The US regional casino market appears set for further consolidation after rumors spread that Penn National Gaming (PNG) and Pinnacle Entertainment were discussing a potential merger.

On Thursday, the Wall Street Journal reported that PNG and Pinnacle had been holding “on-again, off-again discussions” about a deal, citing sources close to the situation. While the talks have so far yet to produce mutually acceptable terms, PNG reportedly remains keen to acquire Pinnacle’s operations.

Neither company saw fit to comment on the Journal’s report, but the news was good for both companies’ stock price, with PNG rising nearly 5% on Thursday while Pinnacle gained 8.4%.

PNG’s current market cap is around $2.18b, while Pinnacle’s is a more modest $1.36b. The combined enterprise value of the companies would be around $11b, with debt accounting for over half that sum.

The Pennsylvania-based PNG operates 27 gaming venues in the US and Canada, including the two Mississippi casinos in added to its roster in March, and also has a social casino division that got a boost from last year’s acquisition of developer Rocket Games.

In its most recent earnings report, PNG reported revenue of $796.5m in the three months ending June 30, with adjusted earnings of $219.1m, although this dipped to $105.2m after PNG made its master lease payments to real estate investment trust Gaming and Leisure Properties Inc (GLPI), which was spun off from PNG in 2013.

Pinnacle operates 16 gaming venues, which generated second quarter revenue of $653.6m and adjusted earnings of $180.7m but this drops to $79.4m after its own lease payments (also to GLPI, which acquired Pinnacle’s real estate assets in 2015).

The fact that the two companies share a landlord in GLPI may help keep the parties at the negotiating table. There is some geographical overlap in the two companies’ portfolios, and both have properties in Pennsylvania, which appears poised to join Nevada, New Jersey and Delaware in approving intrastate online gambling.