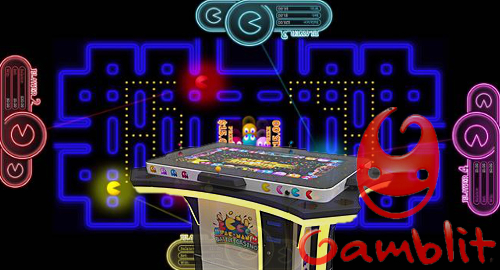 A real-money version of 1980’s arcade classic PAC-MAN is coming to casino floors thanks to skill-based gamers Gamblit Gaming.

On Tuesday, Gamblit announced that it had struck a deal with Japanese games publisher Bandai Namco Entertainment to bring PAC-MAN Battle Casino, a real-money version of the wocca-wocca-wocca classic, to casino floors.

The new gaming product (pictured) will allow groups of two or four players to battle each other for cash prizes. The game is a co-production of Gamblit and the team that brought you PAC-MAN Battle Royale, which Bandai Namco unleashed upon the arcade world in 2011.

Gamblit says the new title will make its public debut at next week’s Global Gaming Expo in Las Vegas and will begin appearing on select casino floors via its Model G interactive tables sometime early next year. Gamblit and Bandai Namco are also working on a new single-player PAC-MAN title for Gamblit’s TriStation hardware.

Gamblit’s chief marketing officer Darion Lowenstein said PAC-MAN “has been a huge part of our culture,” as any Gen-X/Y teen will recall from those Saturdays at the mall when you’d have gone down on a lawman just to get one more quarter. Lowenstein said the real-money version would “another level of excitement to the classic PAC-MAN experience by bringing fans into the modern arcade – the casino.”

This isn’t Bandai Namco’s first foray into the world of skill-based casino gambling, as the company inked a deal in July with Gamblit rival Gameco to bring its 3D fighting game Soulcalibur II to casino floors.

Speaking of GameCo, the company announced Monday that it had deployed eight of its Video Game Gambling Machines (VGM) units at the Choctaw Casino & Resort in Durant, Oklahoma. This marks GameCo’s first Oklahoma casino deployment, following hot on the heels of rival Gamblit placing its Model G tables at the Downstream Casino Resort in Quapaw.

The jury is still out on whether either company’s skill-based games will prove more than a curiosity with casino customers. GameCo’s machines were pulled from three Caesars Entertainment venues in Atlantic City after six months, but the company maintains a presence at AC’s Tropicana and launched at Connecticut’s Foxwoods Resort Casino this spring. Gamblit has multiple installations in Nevada, Southern California, Oklahoma and on Carnival Cruise ships.