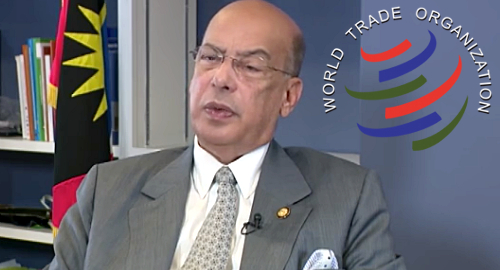 Antigua and Barbuda’s ambassador in Washington wants the US government to finally make good on its outstanding World Trade Organization financial obligations to help Barbuda rebuild after Hurricane Irma.

On Tuesday, Voice of America published an interview with Ronald Sanders, Ambassador Extraordinary and Plenipotentiary to the United States and the Organization of American States for Antigua and Barbuda, in which Sanders detailed the destruction inflicted upon the island of Barbuda last week from Hurricane Irma’s Category 5 fury.

Sanders (pictured) noted that, unlike the region’s other island nations that were in Irma’s direct path, Antigua and Barbuda has no formal ties to Europe or America on which to rely for financial and logistical support. “At the end of the day, it is our country, we have to try our best to keep it going as best we can.”

Sanders said he was encouraged by media reports that actor Robert de Niro, who, along with Australian casino mogul James Packer, has been linked to an integrated resort project in Barbuda, had pledged to aid Barbuda’s relief effort.

Other public figures with ties to the region have also pledged to do their bit, including our very own Calvin Ayre, a longtime Antigua resident and citizen, who has personally pledged $1m to the relief effort and whose Calvin Ayre Foundation is also matching online gambling industry donations up to $1m.

But with an estimated 95% of the structures on Barbuda having been flattened by Irma, and Hurricane Jose expected to blow through the region this weekend, the cost of rebuilding will be staggering. Which is why Sanders believes now is the time for the United States to finally honor its nine-figure obligation to Antigua as ordered by the WTO.

Sanders previously served as Antigua’s ambassador and negotiator to the WTO, back when Antigua first brought its challenge of America’s anti-competitive online gambling trade restrictions in 2004. Antigua ultimately prevailed in that dispute, and the annual penalties the WTO instructed America to pay Antigua have now exceeded $270m, of which Antigua has yet to see a penny.

Given the current crisis affecting Barbuda, Sanders noted that “if ever [the US] want to settle this with us, now is the time. We are a small island state, we don’t have the vast territory of the United States, nor the huge infrastructure that you have, but the infrastructure which we have is important to us and to our survival.”

Describing himself as “a realist,” Sanders acknowledged that Antigua and Barbuda is a small nation and thus “not important to everybody. My country plays the hand with the cards it receives, we try to play it best we can. We will fight on.”

The government of Antigua and Barbuda has launched a GoFundMe page for the Official Barbuda Relief Fund, which we encourage you to visit and contribute. Again, with no major foreign government under any obligation to rush to Barbuda’s aid, and America unlikely to own up to its international trade obligations, it really is up to individuals to step up to the plate.