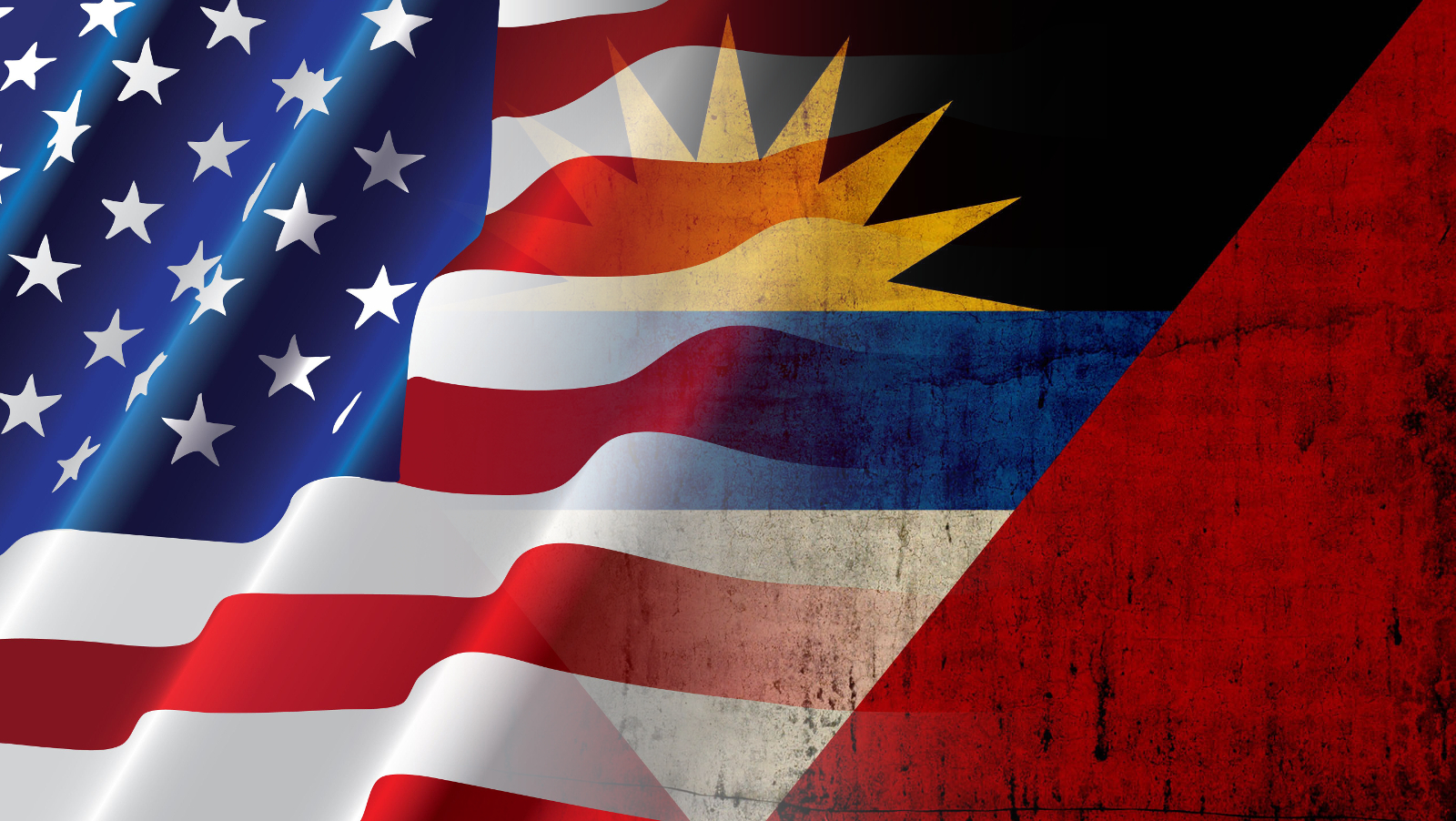 A new report has exposed the legal, economic and political cost of America’s ill-advised online gambling trade dispute with Antigua and the prosecution of Bodog brand founder Calvin Ayre.

The report, written by Dr. Patrick Basham, Founding Director of the Washington- and London-based Democracy Institute, is titled Do As I Say, Not As I Do: How The WTO, Antigua & A Canadian Overcame American Hypocrisy On Free Trade. The report (read it here) bills itself as “a cautionary tale for America’s trading partners, foreign businesses, and fellow members of multilateral economic institutions.”

In the report, Basham lays bare “America’s mistaken campaign to bully, figuratively speaking, a tiny fellow member of the World Trade Organization (WTO), and to persecute and prosecute foreign businessmen, in order to ensure the successful application of ill-conceived domestic legislation.”

ANTIGUAN DAVID v. AMERICAN GOLIATH
Basham begins with an exhaustive recap of the 14-year WTO dispute between the US and Antigua, starting with how American negotiators neglected to exclude gambling services from US trade obligations under the General Agreement on Trade in Services (GATS), despite knowing that other nations had chosen to exercise such options.

America subsequently asserted that its domestic laws, including the Illegal Gambling Business Act (IGBA), could be used to prohibit internationally licensed online gambling operators from accessing the US market.

Antigua, home to over half the online gambling business at the time, challenged this assertion and the WTO agreed that America’s laws couldn’t be used to circumvent its GATS obligations. Yet despite being one of the most active pursuers of redress at the WTO, America has so far refused to abide by the WTO’s rulings re Antigua.

This intransigence leads Basham to warn that “America should not put herself in a position whereby she is vulnerable to accusations of legal hypocrisy or myopic economic self-interest.” But Basham also warns that “it has yet to be shown that protecting the WTO’s integrity is an American government priority.”

Antigua’s estimated loss of trade revenue due to America’s action/inaction is over $250m, a staggering sum for a country with a Gross Domestic Product of just $1b. The loss of this revenue has done untold damage to Antigua’s economy, yet Basham suggests the real damage may be to America’s “essential leadership, political and moral, of the global trading order.”

AMERICA V. CALVIN AYRE (AND NOT ANTIGUA)
In 2012, the US Attorney for the District of Maryland filed felony charges against Ayre, three other individuals and the Bodog online gambling business. Ayre and the others were accused of violating the IGBA, despite Basham noting that “the WTO Appellate Body specifically held that The Illegal Gambling Business Act cannot be squared with America’s GATS obligations.”

The indictment also indicted the Bodog Entertainment Group, despite the fact that Bodog’s US-facing operations had been run by the Morris Mohawk Gaming Group under license since 2007, and that Bodog had officially left the US market in 2011.

Furthermore, the indictment was accompanied by the seizure of the Bodog.com domain, which at the time was owned by Sanctum IP Holdings, an Antiguan company.

NICE ONLINE GAMBLING BUSINESS YOU’VE GOT HERE … SHAME IF ANYTHING HAPPENED TO IT
Basham notes that “the Americans counted upon indicted individuals not engaging in a legal fight with the American government in a US court setting. As in Ayre’s case, a critical mass of prosecutors was well aware that their respective indictments were not built upon firm, let alone strong, legal foundations.”

Among the many interesting revelations contained in Basham’s report is the fact that, years before the indictments were issued, American prosecutors “covertly reached out to Ayre through respective third parties … including Ayre’s known business associates and industry contacts, to ‘encourage’ Ayre to make a US$350 million payment to the US Treasury.”

Basham said these overtures “conveyed an unambiguous message: a ‘voluntary’ payment was necessary to preempt an indictment in US federal court.” Basham draws an unflattering comparison between these messages and gangsters demanding ‘protection’ money from businessmen “to guarantee the latter’s properties and products did not run afoul of the criminal element.”

AYRE REFUSED TO KNUCKLE UNDER
Obviously, Ayre rejected these prosecutors’ offers, and Basham observes that “whether by accident or by the design of astute legal counsel, Ayre’s surprising stamina tested the Americans’ resolve to the breaking point.”

That breaking point came earlier this year. In April, prosecutors dismissed the indictments against Ayre’s co-accused. In July, Ayre’s original felony charges were similarly dropped, and the Bodog.com domain was transferred to him in exchange for a $100k payment.

Basham quotes liberally from the prosecutors’ somewhat sheepish statement to the Court that “the conduct of which Mr. Ayre has been accused no longer carries the same kind of opprobrium in the United States that existed at the time of his indictment.”

The Court was also told that Ayre “has lived under the ever-present cloud of this indictment for over five years now, which has impaired his business interests, marred his reputation, crippled his freedom of travel, and forced him to live under a cloud of anxiety and uncertainty.”

PAYING THE COST
Basham’s report notes that Ayre was forced to pay $8.2m in legal fees to defend himself against these illegal charges. Then there’s the $67m that the Maryland prosecutors expropriated from Bodog’s US customers – money that eventually disappeared into the federal treasury, while Ayre took it upon himself to make Bodog’s US customers “whole” long before any indictments were issued.

But other costs can’t be so easily quantified. Basham notes that “as a direct, albeit unintended, consequence of his indictment, in 2013 Ayre was subject to a kidnapping and extortion plot that, if completed successfully, almost certainly would have resulted in his death.”

Regular readers of CalvinAyre.com will recall the gang of criminals led by Jan Robert Gustafsson, whose shenanigans commenced shortly after the indictments. Basham believes “the American government unwittingly and unknowingly set in motion a series of criminal behaviors by those who concluded that the allegedly corrupt Ayre and his ill-gotten business empire were now “fair game’ for every manner of criminal approach.”

Were it not for Ayre getting wind of the plot and altering his patterns until he could arrange for his escape from the Philippines, Basham deems it “highly probable that the would-be hostage-taking and extortion episodes would have ended with Ayre’s violent death.”

WAS IT WORTH IT?
Basham believes Ayre – who was recently appointed a Special Economic Envoy for Antigua with Responsibility for Bitcoin and Online Gaming – and Antigua “served as convenient ‘straw men’ for an American prosecutorial agency that sought to send an unequivocal message to gamblers, businesses, and multilateral institutions: when it comes to online gambling, America is ‘Closed for business.’”

Basham goes on to say that “the American prosecutors’ modus operandi may be characterized as unnerving to anyone, American or foreign, who respects the rule of law, domestically and internationally. The American approach may equally unnerve those who appreciate their own, and respect others’, constitutionally-enshrined civil liberties.

“The larger cautionary tale, however, is for the US federal government. Future domestic American policymaking should not similarly spill over into international rule-breaking and mistaken, ill-advised prosecutions. Otherwise, America may be viewed increasingly, at least on the trade and legal fronts, as a poor global citizen.”

DR. BASHAM TO PRESENT REPORT IN GENEVA
The Democracy Institute is planning an event to highlight its new report on the evening of September 27 on the doorstep of the WTO’s headquarters in Geneva. The date coincides with the WTO’s Public Forum 2017, an annual conference that draws 2,500 stakeholders to a three-day ‘think-fest’.

Dr. Basham will be joined by an expert panel consisting of Dominic Nicholls, a journalist at The Economist magazine; Jeannie Cameron, the DI’s International Law & Regulatory Fellow; with several other distinguished guests expected to attend. The event will be webcast live via Democracyinstitute.org. ​