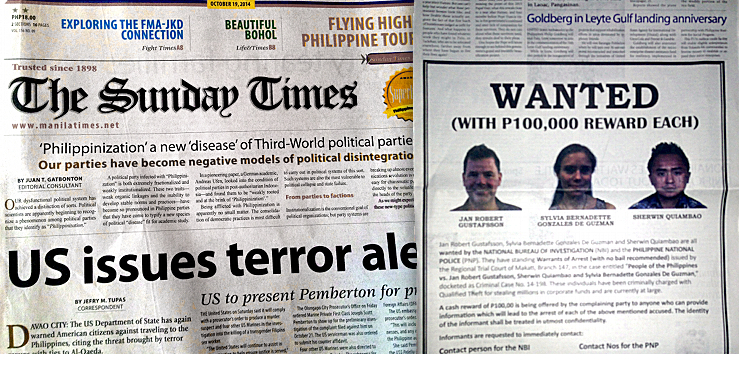 Erstwhile online gambling industry figure Jan Robert Gustafsson woke up Sunday morning with a bounty on his head. Gustafsson and two co-conspirators – Sylvia Bernadette de Guzman and Sherwin Quiambao – are currently wanted on charges of estafa aka qualified theft for stealing US $160k from their former employer. The arrest warrants, issued on Sept. 29 by Judge Ronald B. Moreno in the Regional Trial Court in Makati City, stipulate that the three fugitives are not to be allowed bail.

On Sunday, a notice (pictured above) was placed in the Manila Times’ Sunday edition authorizing payment of P100k ($2,225) to anyone who can provide information that will help bring these three fugitives to justice. A similar notice appeared in Monday’s edition of Business World. The notices, each spanning three-quarters of the page, appeared in the front sections of the newspapers to ensure maximum visibility.

Any person with knowledge of the fugitives’ whereabouts is urged to contact local authorities immediately. Contact numbers have been established at the National Bureau Of Investigation, the Office of the Chief of Police (OCP) of Makati City and the Makati Philippine National Police Warrant Section. Confidentiality is assured to anyone who comes forward. (Contact numbers are visible in the reward notice reproduced in full at the bottom of this page.)

Beginning Monday, volunteers began distributing the reward notices in physical form at specific locations the fugitives are known to frequent. At least 2k copies detailing the bounties will be handed out in the Burgos Street red-light district and at the Rockwell Center in Makati, the Bonifacio Global City clubs in Taguig and within Quezon City.

De Guzman and Quiambao are suspected of having fled the country before the warrants were issued. Gustafsson’s whereabouts remains a mystery, although scuttlebutt has him holed up in some secret hideout with a couple working girls he knows from Cebu. Should any of the fugitives be deluded enough to remain in the Philippines, their world just got a whole lot smaller and their capture a matter of when, not if.

JAN ROBERT ESTAFASSON’S REIGN OF ERROR MUST END
The warrants were issued after Judge Moreno found the trio had attempted to divert money from the company at which they worked to a third party, yet failed to produce evidence justifying the payment. Judge Moreno said he couldn’t find “a semblance of validity to the alleged transaction” or “even just a shadow” of the feasibility study this third party was supposed to have conducted.

These specific charges represent the tip of the iceberg in terms of both the volume of charges pending and the amount of money purloined by the trio and their co-conspirators, who include former Bodog Europe chief Patrik Selin, Jasmin Singh, Maria Arleen Aldaba, Anthony Arcilla, Sukhjap ‘Robbie’ Singh Grewal, Edwin Erpe and others,

The gang has been causing mayhem in the Philippines ever since Gustafsson was fired from Bodog Asia for incompetence in early 2013. A forensic audit subsequently uncovered evidence that the gang had carried out a calculated program of misappropriating cash and technology to fuel the startup of their own online payment processing company, Transact24 Philippines, which is looking to piggyback off the good name of the Hong Kong based payments company Transact24 Ltd. of which their is no relation.

Since being uncovered, the gang has attempted to drag their former company’s name through the dirt in a bid to throw police off the trail. This included Gustafsson knowingly providing false evidence to justify a police raid on his former employer in November 2013. The raid uncovered no wrongdoing but scared the hell out of the staff, for whom Gustafsson liked to claim he served as a benevolent father figure.

Gustafsson’s subsequent press tour, during which he regaled interviewers with tales of parties and mayhem other than his own, painted the entire Philippine-based online gambling industry in a negative light. It was a desperate play, burning his bridges with the industry in the vain hope of getting the police to turn their attention away from himself. But Gustafsson’s Hail Mary pass failed to find its target and now the clock has run out.

Investigators haven’t yet finished charting the full extent of the Gustafsson’s gang illegal activities but many more charges will be issued in the coming weeks and months. Stay tuned to CalvinAyre.com for continued coverage of this gang that couldn’t shoot straight. 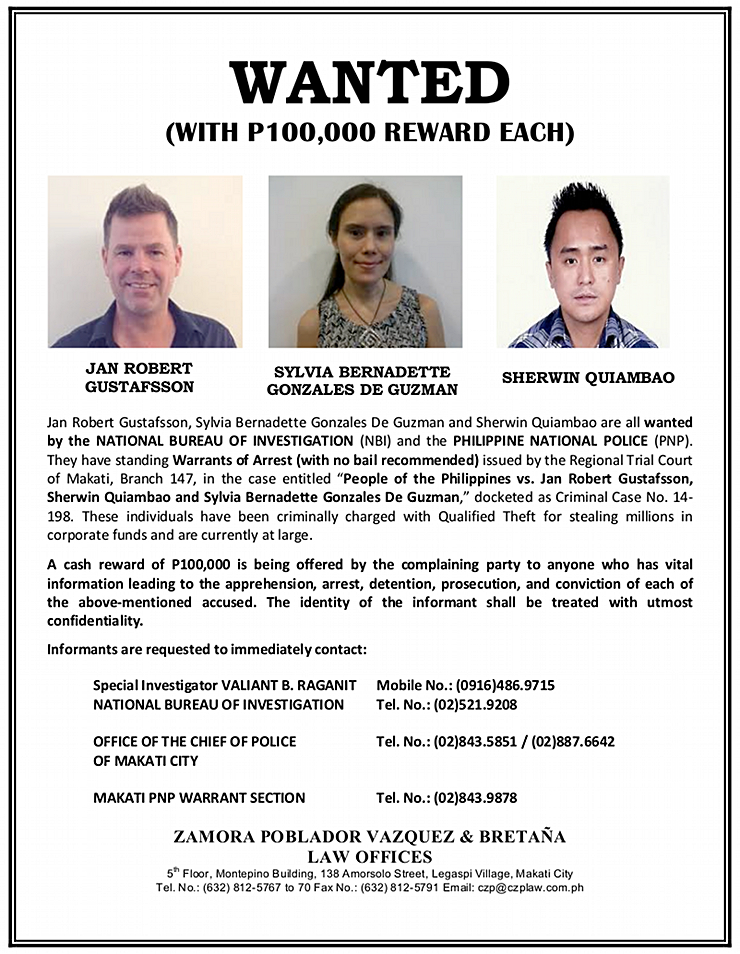