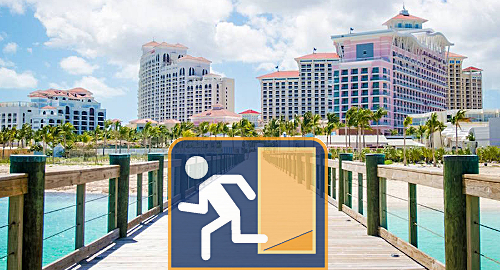 The Baha Mar integrated resort ordered its guests to ‘evacuate’ the premises this week as the Bahamas braced for Hurricane Irma’s arrival.

Baha Mar officially shut down its operations Thursday night as Irma’s path brought its Category 4 fury to the southeastern portion of the Bahamas. Two days earlier, Baha Mar’s Grand Hyatt Hotel informed customers that it would “require all guests to evacuate the property either to local shelter or to evacuate the island.”

On Thursday, Baha Mar senior VP of government and external affairs Robert Sands told the Bahamas Tribune that the property had arranged early departure for “almost 100%” of its guests before the Lynden Pindling Airport was slated to close that night.

The evacuation caused some observers to arch their eyebrows, particularly since many of the Bahamas’ other resorts are traditionally viewed by local residents as the best places to ride out the region’s frequent bouts of inclement weather.

For example, guests at the Atlantis Paradise Island Resort were under no such evacuation order. Atlantis president Howard Karawan did his best not to brag but did tell Travel Weekly that the property’s “20 years of operating in the tropics” had left it “fully prepared to provide shelter and necessary provisions” to its guests.

To be fair, Baha Mar wasn’t the only Bahamas resort to turf its guests this week, as the Sandals chain’s Royal Bahamian and Emerald Bay resorts were forced to close their doors ahead of Irma’s arrival. But Baha Mar, which had a soft opening in April after years of delays, is getting extra attention due to the ongoing narrative that the facility is really not ready for prime time.

Baha Mar’s Sands insisted that there was nothing amiss about the decision to shut down, noting that Irma is being described as possibly the most powerful storm the Atlantic Ocean has ever produced, and that the hotel’s primary concern has to be the safety of its guests.

The interruption and potential damage caused by Irma – and another hurricane, Jose, is currently poised to follow Irma’s path in short order – could spell further trouble for Baha Mar’s principal contractor, China Construction America (CCA), which is struggling to meet an October 15 deadline for ‘substantial completion’ of the resort, with potential fines of up to $250k per day for failing to stick to its schedule.