Paddy Power under fire over ‘always bet on black’ tweet

Irish bookmaker Paddy Power has found itself in the middle of a social media firestorm after advising punters “to always bet on black” ahead of the historic Floyd “Money” Mayweather vs. Conor McGregor fight this weekend. 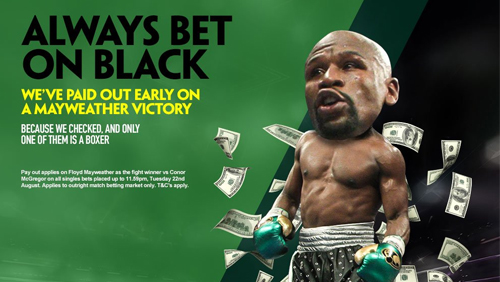 The Independent reported that the Dublin-based bookmaker has already settled bets of those who have backed Mayweather to beat the Irishman in the multi-million dollar mega-bout this Saturday at the T-Mobile Arena in Las Vegas, Nevada.

Punters who wagered on Mayweather received £250,000 (US$320,175) four days before the biggest commercial night in the history of combat sports.

Paddy Power, however, grabbed people’s attention with what some described as a racist explanation on why it decided to pay out on Mayweather against their countryman McGregor.

The Irish bookmaker tweeted on Wednesday an advertisement that read: “Always bet on black. We’ve paid out early on a Mayweather victory. Because we checked only one of them is a boxer.”

There’s also a similar but longer advertisement posted on Paddy Power’s website that explains: “We’re spinning the roulette wheel a bit here – as getting it wrong would see a serious Mac Attack on my bank balance. But, when you’re backing Mayweather, you’ve basically covered the whole board anyway. Patriotism aside, we are paying out early on a Mayweather victory – because we checked, and only one of them is a boxer. We always bet on black.”

Many find the PaddyPower tweet distasteful, especially at a time when the issue of racial discrimination is once again at the forefront of the public issues. Most of them called on the bookmaker to takedown the “racist” tweet.

In its defense, PaddyPower claimed that the slogan is a reference to a quote by Wesley Snipes in the 1992 film Passenger 57.

“Like Wesley Snipes – who famously delivered the line – Floyd Mayweather is rightfully proud of his identity and, while the advert does reference his race, it does so in a manner which isn’t in any way derogatory or insulting,” a company spokesman said. “It’s also a betting-related pun which references a roulette wheel. Because we’re about gambling – get it? If people don’t like it that’s entirely their prerogative.”

The spokesman went on to say that “Floyd Mayweather is black and we’re suggesting you should bet on him because we believe that he’s going to win. We wouldn’t be paying out otherwise.”

All seems good on Mayweather’s side despite the controversial advertisement.

“I’m looking right here online, Paddy Power is paying out right now on my victory and the fight hasn’t even happened yet. PaddyPower believes in me. The Irish fans believe in me,” Mayweather said in a video clip he tweeted on his official twitter handle.