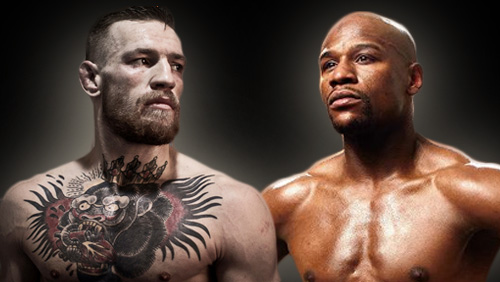 Floyd Mayweather and Conor McGregor have finally set the date. For their mega bout, that is.

The UFC superstar broke the news with a tweet, in which he “accidentally” used the photo of Floyd’s 64-year-old father, confirming that the fight is on. Minutes later, the retired pound-for-pound boxing champion also took to Twitter to confirm the date: August 26 in Las Vegas.

Early this week, the Nevada Athletic Commission approved a request from the Mayweather Promotions to put on an August 26 boxing card at the MGM Grand, even though neither of the two fighters currently has a license to box in the state. Meanwhile, TMZ Sports quoted Dana White who said it will be a 12-round boxing match that will take place at the T-Mobile Arena.

White reportedly said “there will be an undercard,” and it will be boxing matches, with Mayweather Promotions handling the matches.

And because this is Mayweather and McGregor—the two biggest egos in combat sports—we’re talking about, it’s only a matter of time before all sorts of betting angle on the match will come out.

Oddsmaker Bodog, which has unveiled every kind of prop bet imaginable for the August 26 match, expects the overall money and wagers on the bout to rival the Super Bowl, or possibly even surpass it.

Bodog originally released a line of 10/1 for McGregor to win the bout in November, but that line has since moved all the way down to 4/1. Mayweather is currently at -600.

The odds also favor a Mayweather victory either by decision or later in the fight. The odds dropped from 20/1 in the first two rounds to 14/1 in the fourth to eighth, but rose again to 33/1 in the 12th round. The boxer is also a 13/10 favorite to win by decision amid expectations that he will draw out the fight.

The odds on McGregor, meanwhile, will pay as much as 100/1 if the UFC superstar manages a victory on either a split or technical decision. If the fight ends in a draw, bettors could cash in on 33/1 odds.

And regardless of how the ugly the fight will end up, Mayweather and McGregor’s face-off on the boxing ring is expected to be one of the most popular pay-per-view purchases of all time. Bodog has set the over-under of PPVs at 4.99 million.