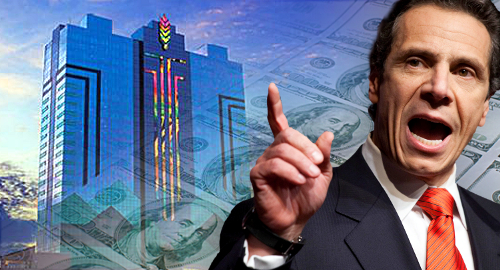 New York Gov. Andrew Cuomo is threatening to end the Seneca Nation of Indians’ casino exclusivity in Niagara Falls unless the tribe resumes revenue-sharing payments with the state.

In March, the Senecas announced that its three upstate casinos in Buffalo, Niagara Falls and Salamanca would stop remitting a 25% share of their slot machine revenue – worth approximately $125m per year to state and local governments – on April 1. The tribe argued that its gaming compact allowed it to stop making the payments once the compact’s initial 14-year term concluded at the end of 2016.

On Monday, the Buffalo News quoted a Cuomo spokesman threatening that the state would authorize a new commercial casino in Niagara Falls if the Senecas failed to resume their revenue payments to the state and to the local host communities in which the Seneca gaming venues operate. The Seneca Niagara Casino is the tribe’s most lucrative gaming venue.

This isn’t the first time Cuomo (pictured) has issued his Niagara Falls ultimatum, having made similar threats in 2013 when the parties were at loggerheads over local racetracks adding slots to their gaming mix. That impasse was eventually resolved after the state admitted it had violated the terms of the gaming compact and allowed the Senecas to keep $200m in withheld revenue sharing payments.

This most recent squabble is due in part to the Senecas being irked by the state’s issuance of three new commercial casino licenses in 2015, and the opening this February of the del Lago Resort & Casino in Seneca county.

There are currently no talks scheduled between Cuomo’s office and the tribe, allegedly due to the discovery of a listening device in an office of the tribe’s Buffalo casino. The office was being leased by the New York State Gaming Commission, which maintains a presence in all the state’s tribal casinos.

On Monday, the Erie County District Attorney’s office confirmed the discovery of the listening device and its investigation into allegations that Seneca Gaming Authority officials had been monitoring Gaming Commission officials’ conversations. The investigation has been underway for some time but is said to be intensifying.

Cuomo’s legal counsel Alphonso David issued a statement saying it would be “inappropriate” for the governor to meet with tribal officials until the “publicly reported and verified criminal investigation” is concluded.

Seneca President Todd Gates disputed these remarks, saying he and Cuomo had been scheduled to meet in Niagara Falls on Tuesday but the governor cancelled. Gates called the eavesdropping allegations “a completely unrelated legal issue” from the compact dispute and warned that it was in no one’s interest to “distract from, nor try to politicize” the cancellation of the meeting.

On Tuesday, Cuomo repeated his threats, saying the tribe was “not fulfilling the compact and their right to exclusive gaming is gone.” Despite the new commercial casinos underwhelming performance to date, Cuomo claimed to have “no doubt that we would get companies from around the world to bid on casino rights in the Buffalo/Niagara area.”