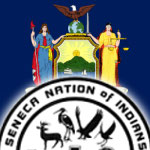 All is now well between the state of New York and the Seneca Nation of Indians after the two sides finally agreed to a deal after a long and drawn out dispute involving the latter’s casino payments to the state. But after intense negotiations between the two parties this week, an agreement was finally reached thus ending the contentious battle between the two sides that have dragged on for years.

The biggest reason for the public squabbling between the two stemmed from the $630 million in revenues Seneca refused to pay to the state after it argued that the introduction of slot machines in racinos in Western New York broke the tribe’s “exclusivity rights” in the area. The back and forth bickering went on for a few years until finally, both New York governor Andrew Cuomo and Seneca President have announced that a deal is now in place that both parties signed off on.

As part of the deal, the $630 million in payments withheld by the tribe will now be divided into three with the Seneca casinos, the Seneca tribe, and the state getting significant shares of the total amount. The three Seneca casinos in Niagara Falls, Salamanca, and Buffalo will receive $89 million, $34.5 million, and $15.5 million, respectively.

Taking the total amount out of the entire pie, the tribe and the state would then split the remaining 75% of 560 million in past payments from Seneca casino operations in the three cities, equating to about $210 million each for the two sides.

In addition to resolving the monetary dispute, the deal between the state and the tribe also calls for the latter to resume its on-going payments from casino operations to the state, an amount pegged at $135 million annually. In addition, the Seneca tribe’s exclusivity rights will remain intact, keeping it out of the grasp of the government’s casino expansion plans in the state. Three non-Indian racetrack “racinos” in the region, the original source of Seneca’s dispute against the state, will be allowed to continue operating, so as long as the three casinos don’t promote themselves as casinos.

The state’s deal with the Seneca Nation of Indians makes it the third deal the governor has struck with state tribes with the Oneida and the St. Regis Mohawk tribes having earlier struck their own deals with the state.