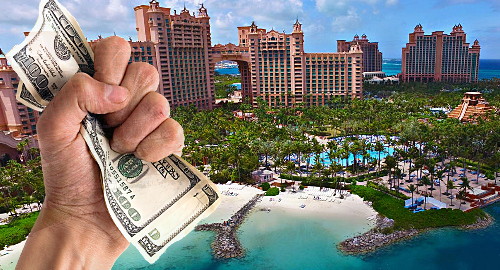 The Atlantis resort casino on Paradise Island is spending up to $130m over the next couple years to ensure the property keeps pace with the new kid on the Bahamas block.

The Atlantis opened its doors nearly 20 years ago and while the resort remains a popular destination, including hosting an annual PokerStars tournament event, its status as the Caribbean’s go-to gaming venue is under threat from the new $4.2b Baha Mar resort.

This week, Atlantis president/managing director Howard Karawan told Tribune Business that owner Brookfield Asset Management would likely spend “north of $80m” this year to gussy up the property, and Karawan says he foresees the company spending “another $50m or so” in 2018 “to keep the product fresh and updated.”

Karawan told the Bahama Journal that “absolutely we can coexist” with Baha Mar, particularly if the new resort “follows in our footsteps and opens new facilities that can grow the market and we not steal from each other.”

Karawan said the amenities planned for Atlantis’ ‘phase four’ are intended to provide more authentic Bahamian experiences for guests by partnering with local restaurateurs, craft brewers and even ice cream makers. “Our guests can go anywhere and get Häagen-Daaz. There is only one place they can get things like bennie cake and guava duff.”

Karawan said Atlantis had enjoyed room occupancy in July “well north of 90%,” a significantly higher figure than Baha Mar, which recently reported its one operational hotel was only around half-full, although the property only opened a few months ago and Baha Mar execs insist that they’ve yet to roll out the big marketing guns.

Atlantis execs met with Baha Mar’s president Graeme Davis in March to hopefully establish ways of working together to ensure they grow the Bahamas’ overall tourist market so that both properties and the country itself benefit.

Baha Mar is owned by Chinese conglomerate Chow Tai Fook Enterprises (CTFE) and Karawan said Baha Mar appeared intent on luring “a lot of visitors from Asia and China … if we can do things to expand the market and they can do some as well, that’s wonderful.”