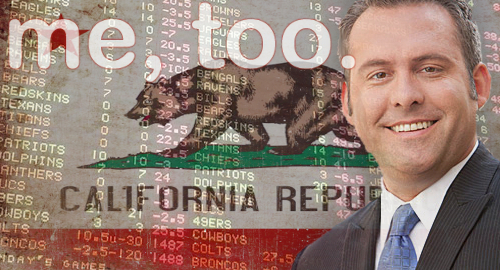 California has joined the ‘me too’ parade of states looking to piggyback on New Jersey’s push to overturn the federal ban on sports betting.

Gray issued a statement saying his ACA 18 amendment reflected the reality that Californians were already betting on sports via any number of internationally licensed online gambling sites, and ACA 18 was merely his effort to “bring this multibillion dollar industry out of the shadows.”

California is but the latest in a growing chorus of states that have expressed interest in offering legal sports betting to their residents, now that New Jersey’s tireless efforts appear close to bearing fruit. Frankly, with the exception of Utah and Hawaii, it’s hard to think of a state that wouldn’t at least consider legal betting if there was no federal nanny standing in its way.

For the record, this isn’t California’s first kick at this can. The state Senate gave serious consideration to a series of sports betting bills a few years ago, but none made it past the finish line, due in part to the skepticism regarding New Jersey’s chances in the courts.

That said, even if the Court rules in New Jersey’s favor, it’s not hard to imagine California fumbling this ball. After all, this is the state that has made not passing online poker legislation something of a seasonal event, like Groundhog Day. (Gray himself has proposed some of these poker bills.)

Bottom line: it’s a legislator’s job to prepare the ground to ensure that his constituents are able to capitalize on changing situations. But Gray’s amendment means squat until the Court issues its verdict.

And it seems we’ll have to wait a while longer to hear that verdict. The Court’s next term starts in October, and Wednesday saw the release of the first slate of cases for which the Court will hear oral arguments. New Jersey’s case didn’t make the cut, meaning the earliest it will be heard is now November.