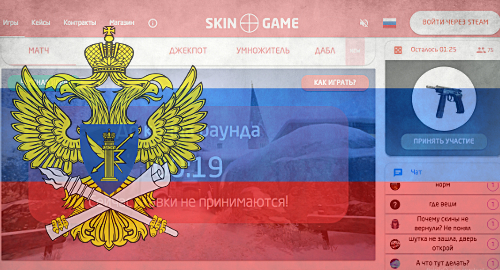 Russia’s telecom watchdog is taking a harder look at eSports skin betting sites due to their resemblance to an ‘online casino for children.’

Skin betting sites allow eSports players the opportunity to obtain rare, high-value in-game virtual items (skins) by wagering skins of lesser value on the outcome of eSports matchups, or by engaging in lotteries or casino-style games of chance. Valuable skins can then be sold for real cash via eSports marketplaces such as Valve’s Steam.

Last year saw a wave of eSports developers begin cracking down on third-party sites that facilitated skin betting on popular titles such as CS:GO, while gambling regulators have begun warning skin betting sites that they need to acquire local gambling licenses or face the consequences.

This week, a Roskomnadzor spokersperson told Izvestia that the blacklisted skin betting sites were targeted because their “main purpose is to involve children in games of chance.” Regardless of what age group they target, Russian law permits only sports betting operators to apply for online gambling licenses, meaning any kind of online casino or poker site is illegal.

Roskomnadzor is among the most ban-happy online watchdogs around, and gambling sites are a particular source of attention. The agency added 5,273 gambling domains to its blacklist in just the month of June, including Google.ru, which was temporarily blocked by overly cautious local internet service providers due to an inadvertent redirect to Russian bookmaker Fonbet.

Meanwhile, Russia continued to tighten the noose on local internet access this week, as the Duma approved the last of three required readings of new legislation to ban the use of virtual private networks (VPN) and other proxy services that allow Russians to circumvent Roskomnadzor’s censorship.

Russia’s Ministry of Communications also recently published a draft document of its plans to allow Roskomnadzor to block ‘mirror’ sites of previously blocked domains. Any site that redirects to a blocked domain, has similar user account data and settings, or features similar design and content would be automatically added to the online naughty list. The proposal is up for public discussion until August 10.

A growing chunk of Russia’s netizens are increasingly antsy about their government’s desire to control everything they do online, as evidenced by a group of ‘Left Bloc’ activists who this week used bicycle locks to seal shut the doors of Roskomnadzor’s Moscow office.

The activists, who are planning a protest march on Sunday, said their goal in locking Roskomnadzor’s doors was to mimic the ‘Error 451’ messages that Russians receive when attempting to access a blocked domain. Subtle, that. Hope it’s still funny when they’re freezing their left nuts off in Siberia.