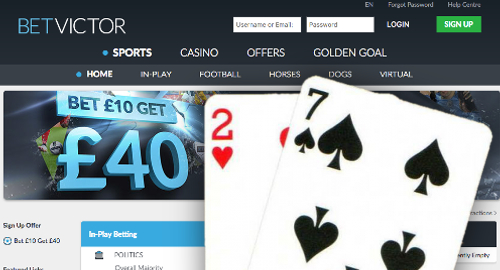 Gibraltar-based online gambling operator BetVictor has become the latest company to conclude that online poker is no longer worth its while.

A quick load of the BetVictor website will reveal any number of sports and casino betting options, but poker is nowhere to be found, having undergone a Stalinistic purge from the company’s official history as of Wednesday.

BetVictor broke the news to its customers via an email thanking them for their patronage over the years. The company followed that up with a frequently asked questions notice, which was first revealed by the Krackedkings poker affiliate forum. BetVictor’s poker players were told they could either withdraw their account balance by June 7 or transfer their funds to BetVictor’s Sports/Casino wallet.

Non-cashable points are now worthless but unused tickets were redeemed for cash upon closure of the poker site. Rakeback customers were assured they would receive a payment on June 7 for all funds generated over the first week of June. Affiliates were promised that their commissions would be paid as normal following submission of the necessary invoices.

BetVictor’s poker site operated as part of Microgaming’s MPN network, which hasn’t been having the best spring. Last month, another MPN skin, UK-based three-dimensional poker specialists PKR, abruptly shut its doors due to “recent financial difficulties.” Unlike BetVictor, PKR’s players received no advance notice and are still waiting to learn whether they’ll ever be reunited with their account balances.

BetVictor was founded by betting legend Victor Chandler, who sold the company to UK racing notable Michael Tabor in 2014. Chandler stayed on as a consultant to the new owners, but recently resurfaced as the founder of a new African-focused mobile sports betting and gaming company called Bet Lion that expects to launch this August. No word on whether the site will offer poker.