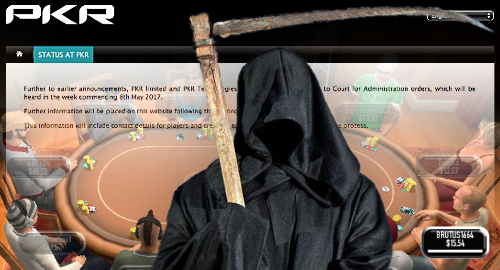 On Wednesday, PKR’s website alerted players that its parent companies PKR Ltd and PKR Technologies Ltd had “experienced recent financial difficulties and are in the process of taking professional advice.”

On Friday, this message was updated to confirm that the two companies had “filed applications to Court for Administration orders, which will be heard in the week commencing 8th May 2017.”

The message went on to say that further updates would be released following next week’s hearings that would “include contact details for players and creditors to address queries and details” of the administration process. In the meantime, the site’s social media accounts have gone dark, leaving players with few answers to their many questions.

PKR’s poker network host, the Microgaming Poker Network (MPN), issued a notice on Friday stating that it had received a request on Wednesday from PKR seeking a suspension of gameplay. Microgaming appeared equally in the dark as to the reasons behind PKR’s request, but promised to relay information to players as it became available.

PKR, which launched in 2006, had carved out a small but lucrative niche for themselves as an independent 3D poker site. PKR joined the MPN in early 2016 in a bid to boost its liquidity following the Alderney-licensed site’s withdrawals from a number of European regulated markets, including France, Italy and Portugal. The site also underwent a wholesale shuffling of senior management positions and added other non-poker options such as virtual sports.

Companies House filings indicate that PKR appointed two new directors – one of them an accountant – to its board this week, and eGaming Review quoted a former senior staff member saying that employees had been sent home and that administration was indeed the most likely outcome of this scenario.