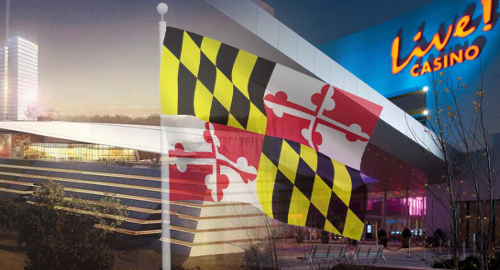 Maryland’s newest casino came within a whisker of topping its all-time highest monthly revenue in May, while the state’s former top gaming venue plots its revenge.

Figures released Monday by the Maryland Lottery and Gaming Control Agency show the state’s six casinos generated gaming revenue of $136.5m in May, up slightly from April’s $135.7m and second only behind March’s record $141.2m.

May’s sum is 30.8% higher than the same month last year, although May 2016 didn’t feature contributions from MGM Resorts’ National Harbor property, which opened last December. Comparing only the five casinos that were open in both months, May’s revenue was down 17.7% year-on-year.

National Harbor reported revenue of $50.5m, the second time the property has topped the $50m mark and second only behind March’s record $51.2m. Runner-up Maryland Live! wasn’t too far behind at $45.9m, although this was down 22.3% year-on-year.

MARYLAND LIVE! DROPS THE MARYLAND
Maryland Live! celebrated its fifth anniversary on Tuesday by rebranding itself under the truncated moniker Live! The Cordish Companies-owned property is marking the anniversary by giving away more than $1m in prizes – including five Tesla automobiles – throughout the month to All Live! Rewards Card members.

Cordish is currently working on a $200m expansion of its Live! property that will see a new 310-room luxury hotel open in Q1 2018. The expansion is part of the company’s need to up its game to compete with the shiny new National Harbor attraction just 35 miles away.

Live! marketing VP Mario Maesano told the Baltimore Sun that the property has been able to hold its own against the new competitor thanks in part to the company’s rewards program, which boasts more than a million members and recently expanded from one tier to six.

Gaming USA Corp president Alan Woinski believes both National Harbor and Live can “settle in with their own niche customer,” with National Harbor attracting “the more high-end, tourist and game player, while Live has the location and enough traffic near them to remain strong.”