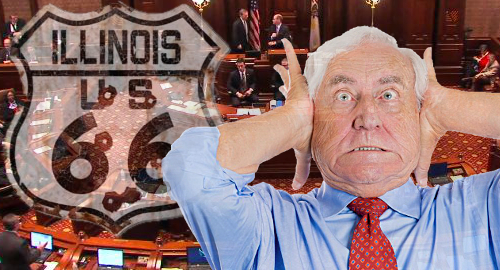 Before we go any further, understand that the state House of Representatives adjourned without considering the legislation in question, and won’t be back in session until June 8. Meaning the state’s online gamblers have a long nervous week ahead to frantically dial their local representatives and yell ‘one time’ into the phone.

The Senate vote – 42-10 in favor of passage – came as something of a shock, as the state legislature hasn’t seriously considered online gambling legislation since, well, ever. Multiple bills have been filed over the years but none of them made any headway whatsoever.

It’s unclear which way the House tilts on the subject of online gambling, although the speaker is known to be resistant to its charms. That said, the House will be tasked with approving a new state budget, and the upfront fees for online gambling operators would go a long way toward plugging the expected deficit.

It’s almost surprising that it’s taken Illinois this long to get here, as it was the first US state to sell lottery tickets online in 2012. Illinois was also one of two states whose queries regarding other online gambling products led to the 2011 Department of Justice opinion that the 1961 Wire Act applied only to sports betting.

Searching for a historical precedent, it helps to remember that when the Russian people overthrew Czar Nicholas II in 1917, thereby ending three centuries of Romanov rule and ushering in the world’s first Communist government, a quote made the rounds to the effect that “the slowest people on earth had done the quickest thing in history.” Ahem.

SO WHAT DOES THE BILL SAY?
As amended by the Senate, HB 479 would create the Internet Gaming Act, along with a new Division of Internet Gaming within the Illinois Gaming Board. The bill allows for both online poker and casino products.

Online licenses would be available only to the state’s licensed casino and horseracing operators. The latter category has to have conducted more than 30 days of live racing in 2016, although two additional licenses could be issued to operators who are issued racing licenses after 2016. Online advance deposit wagering operators are also eligible for licenses, but only if they handled $1m in Illinois-based handle in 2016.

Successful applicants will pay $10m upfront as a deposit against future tax obligations, which will be set at 15% of gross gaming revenue. However, during the initial five-year license term, operators will be taxed at 10% on the first $100m of annual revenue, and 15% on revenue above $100m.

Each online licensee would be limited to “not more than 2 internet gaming skins,” each of which “must reflect a brand owned by the licensee or any affiliate of the licensee in the United States.” Affiliate, in this context, is defined as a person who “directly, or indirectly through one or more intermediaries, controls, is controlled by, or is under common control with a licensee.”

Online technology vendors will pay application fees that won’t exceed $250k. The bill says it won’t certify any vendor “who has accepted wagers via the Internet in contravention of this Act or in contravention of any law of the United States.” Previous Illinois bills contained far more specific definitions of ‘bad actors,’ but the above language casts a pretty wide net.

DFS license application fees would be based on revenue, with operators earning over $10m per year paying $25k, those earning between $5m and $10m paying $12,500, and so forth, bottoming out at $500 for operators generating revenue under $100k. Similarly, annual license fees range from $50k for the top earners while bottom feeders would pay the low, low price of $1,125.