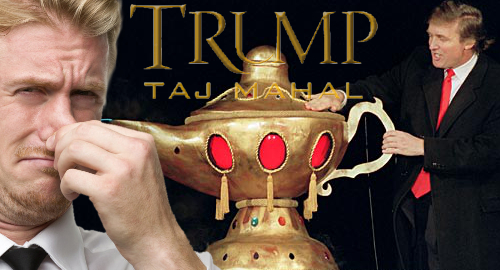 The chairman of casino operator Hard Rock International (HRI) can’t wait to rid the Trump Taj Mahal of everything that reminds people of the current occupant of the White House.

In March, HRI struck a deal with Donald Trump’s buddy Carl Icahn to acquire the shuttered Atlantic City casino and promptly announced plans to spend $375m remodeling the joint as the new music-themed Hard Rock Atlantic City, which is set to re-open in summer 2018.

Speaking at this week’s East Coast Gaming Congress, HRI chairman Jim Allen announced that the company’s remodeling plans were likely to cost closer to $500m. HRI is serious about making a splash in AC, and Allen said that it “does us no good to put some guitars on the wall and new carpets, and say ‘I can take 5 or 10% of the business from Resorts or Harrah’s.”

But the increased price tag also reflects HRI’s desire to purge the property of the current US president’s tacky design aesthetic. “It’s everywhere,” the Associated Press quoted Allen – who used to work for Trump back before the spray-tanned mogul’s casino empire crumbled – expressing revulsion at “all those minarets and all that purple. Jesus! What were we thinking?”

HRI also plans to eliminate the toxic relationship that Icahn had with the Taj Mahal’s unionized employees. The property’s closure last October came as a direct result of Icahn not being able to make nice with Unite Here Local 54, whose members went on strike after Icahn convinced a court to rescind their pension and health care benefits.

Allen said he has already met with Local 54 president Bob McDevitt and is convinced that the two sides are on the same page regarding a new contract and a fresh start. Allen said there would be “no dispute with Local 54. We are going to put people back to work. We’ll get it done. We’ll do it fair.”