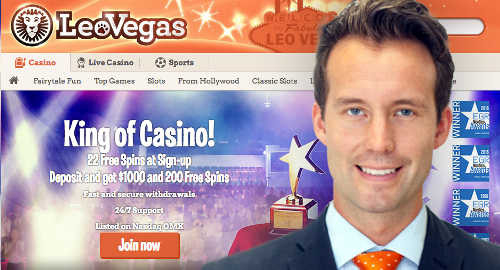 Swedish mobile gambling operator LeoVegas is bidding farewell to the CEO of its Malta-based subsidiary.

On Tuesday, LeoVegas announced that Johan Styren (pictured), who heads up LeoVegas Gaming Ltd, would be leaving his post on June 30. Styren, who has held the CEO position for the last five years, will remain as director of some LeoVegas divisions for a transitional period, then it’s off into the sunset.

LeoVegas Group CEO Gustaf Hagman praised Styren’s “amazing effort” over the past five years and wished him well in his future endeavors. Styren said he was moving on to face unspecified “new challenges” but looked back fondly at his 2012 arrival at the company, when “we had just launched and we had no customers. Today, we are market leaders.”

Earlier this month, LeoVegas released its Q1 earnings report, which showed revenue rising 49% to €43.9m in the three months ending March 31. The company reported earnings of €6m versus a €1.3m loss in the same period last year, while operating profit came in at €5.5m from a €1.6m loss.

The quarter benefited from the launch in December of LeoVegas’ Denmark-licensed operations. Hagman said the Danish market debut had gone “extremely well” and was “one of the most successful launches” in the company’s history. Denmark accounted for 3% of Q1’s overall revenue.

The quarter also saw LeoVegas complete its acquisition of the Italian-licensed operations of Winga.it. The business will eventually be transitioned to the LeoVegas brand, and Hagman sees great growth potential due to his view that “the mobile journey has yet to take place in Italy.”

The Italian launch means LeoVegas is now active in five regulated markets, along with the UK, Denmark, Ireland and Malta. Regulated markets accounted for 18.3% of Q1 revenue, up from 17.6% last year, but Italy only contributed to this total in the month of March.

Depositing customer numbers were up 42% to 172k in Q1, while new customers were up 23% to 75k. Deposit growth was slower than in Q4 due to LeoVegas exiting the Czech Republic – which accounted for 4% of Q4 revenue – to comply with the market’s new regulatory regime. LeoVegas said it doesn’t intend to apply for a new Czech license.

Hagman said LeoVegas started Q2 off on a tear, with April’s net gaming revenue up 79% over last year to €16.5m. Hagman said LeoVegas began ramping up its marketing efforts in Q1 and the expectation is that the company will begin to see greater returns on this investment as the year progresses.