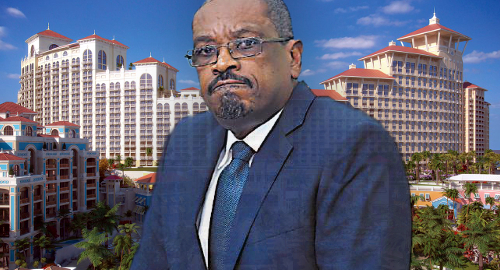 Voters in the Bahamas have elected a new government that could spell trouble for the $4.2b Baha Mar integrated resort and casino.

Minnis (pictured) was a vocal critic of the Christie government’s handling of the Baha Mar bankruptcy process, the property’s subsequent sale to Chinese conglomerate Chow Tai Fook Enterprises (CTFE) and the sweetheart terms of operation that CTFE was able to extract from the government. Baha Mar held a ‘soft opening’ late last month but won’t begin accepting actual guests until May 29.

In March, Minnis posted a statement on Facebook saying, if elected, he planned to “execute a real sale of Baha Mar to a qualified and respectable purchaser.” Baha Mar’s original developer Sarkis Izmirlian, who claimed the bankruptcy was primarily due to his getting sandbagged by the property’s Chinese-owned main contractor, has made repeated attempts to reclaim ownership of the property.

While Izmirlian’s hopes may have risen, some the dethroned politicians have new reasons to worry. Minnis used Wednesday’s night’s victory speech to warn that “those who have abused positions of trust may have something to fear.” Minnis vowed to unleash the auditor general to pore over the government’s accounts and “if there is evidence of criminality we will let the law take its course.”

That likely spells trouble for former Education Minister Jerome Fitzgerald, who, along with Christie and most of his cabinet, lost his personal election race on Wednesday. Last month, incriminating emails surfaced showing that Fitzgerald had lobbied hard (but ultimately unsuccessfully) on behalf of family-owned companies to obtain Baha Mar-related contracts from Izmirlian.

Fitzgerald led the negotiations that resulted in CTFE acquiring Baha Mar and critics have wondered if Izmirlian’s refusal to grant those contracts to Fitzgerald’s family played a role in Izmirlian’s Baha Mar bid not being taken seriously.