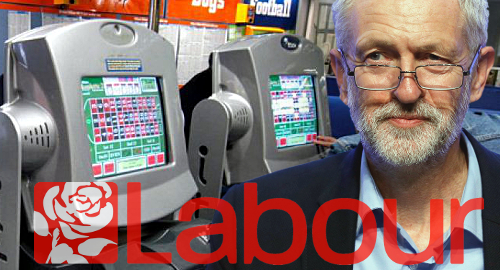 A draft of Labour’s 2017 general election manifesto was leaked late Wednesday, revealing the party’s shift further to the political left. In addition to calls for re-nationalization of some privatized interests, including British Rail and the Royal Mail, the manifesto also calls for a reduction in maximum FOBT stakes from their current £100 to just £2.

The manifesto says a Labour government would also “legislate to increase the delay in between spins on these games in order to reduce the addictive nature of the games.” The machines currently allow players to make a fresh wager three times a minute.

Labour’s anti-FOBT stance isn’t new, as former party leader Ed Miliband railed against the machines ahead of the 2014 general election. The ruling Tories have suggested some types of restrictions are in the works, but as the government, they are more conscious of how much tax revenue the machines generate, and the party had to be more or less publicly shamed into taking action.

The Association of British Bookmakers (ABB) was quick to respond to the Labour manifesto, issuing a typically full-throated statement decrying the party’s “bizarre and unjustified attack on betting shops.” The ABB claimed that the proposed curbs “would destroy over 20k jobs, close thousands of betting shops, cost millions of pounds in lost taxes … and end a popular activity for millions of people.”

The ABB also accused Labour of having “fallen for the spin of our commercial rivals who have a vested interest” in hobbling high-street bookies. Earlier this month, the ABB scored a PR victory after the UK’s parliamentary watchdog criticized an anti-FOBT report from a group of MPs that failed to declare financial support received from bookie rivals that stand to benefit from FOBT restrictions.

The Tories were reportedly on the cusp of issuing the findings of their triennial review of the nation’s gambling industry until Prime Minister Theresa May issued her snap election call last month. UK election rules prevent the government from making major policy announcements during a campaign, which means the review’s findings aren’t likely to be released until autumn.