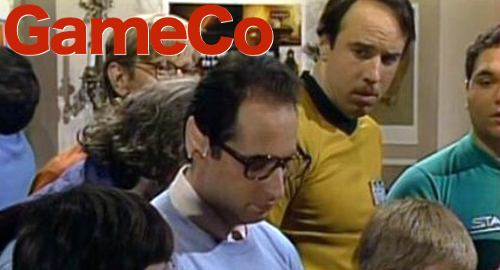 On Monday, GameCo announced it had inked a license agreement with CBS Consumer Products, which owns the lucrative Star Trek franchise. GameCo says it expects to have the first Star Trek VGM – based on the Deep Space Nine spinoff – on casino floors this fall.

The deal provides GameCo access to “multiple” varieties of the wide Star Trek pantheon of titles, including the fromage-filled original series, as well as The Next Generation, Voyager, Enterprise and DSN sequels.

GameCo’s Star Trek Deep Space Nine Adventure will reportedly allow grown men — and they will all be men, pointy plastic ears and all – to “take lead of the USS Defiant and battle their way to victory in immersive ship-to-ship combat.”

(We’d surmise that these players’ girlfriends will be waiting patiently over by the bar while they play, but honestly, Katy Perry has likely kissed more girls than the average DSN fan, so why not just call the title DSN Sausage Fest and be done with it?)

Rich Maryyanek, GameCo’s head of global business development, expressed delight at partnering with “one of the most iconic and popular brands ever” and vowed that GameCo would infuse the new VGM with “the entertainment value Star Trek is known for.”

GameCo launched its first VGM last fall at Caesars Entertainment’s Atlantic City casinos and at the Tropicana Atlantic City, and GameCo plans to launch an additional 10 VGM titles this year, including games based on popular movie franchises Mission Impossible and Terminator 2: Judgment Day.

While the test has only just gotten underway, Gamblit CEO Eric Meyerhofer told the Las Vegas Sun that early indications were “going great.” Meyerhoffer said game players were “skewing younger” than the average slots jockey and players were “fist-bumping even when they were losing, which is a great sign.”

According to Meyerhoffer, the average play time on the new machines is around 45 minutes, although some players are stretching their play past the two-hour mark. Unfamiliarity was keeping initial bets small, around $2, although this increased to around $20 as players grew more comfortable with the game play.