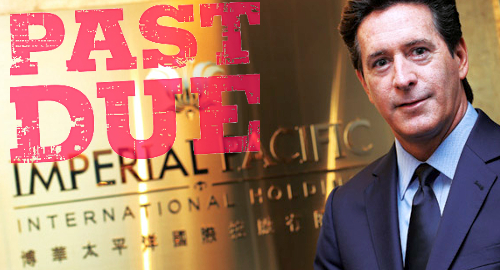 On Thursday, Moody’s Investor Service cut its rating on IPI by one notch to Caa1, the second time in three months that Moody’s has downgraded IPI. Moody’s warned that IPI was at “very high” risk of defaulting on its debts and said further downgrades were likely in the medium term.

Moody’s downgrade was based in part on revelations in IPI’s 2016 annual report, which detailed the growing volume of bad debt writeoffs and increasingly dubious receivables on IPI’s ledgers. Last year, IPI wrote off $38.6m of its high rollers’ debt as unrecoverable, took a $109m impairment on other debts and indicated that an additional $135.1m was over seven months overdue.

Saipan gaming regulators have so far approved only one junket operator to work with IPI, leaving the company no option but to issue credit directly to its VIPs. This offers IPI a larger share of the profits but also leaves the company holding the bag if VIPs prove unable or unwilling to honor their markers.

IPI exec Mark Brown (pictured) previously stated that IPI’s direct dealings with VIPs ensure that the company thoroughly vets its customers but Moody’s suggested that IPI’s bad debt figures are “indicative of its weak management of accounts receivables.” Moody’s expressed concern over IPI’s “liquidity position and the sustainability of its business model.”

Similar default warnings have been expressed by Fitch Ratings Inc, which downgraded IPI’s credit rating in January based on the company’s strategy of dealing directly with its VIP gamblers.

IPI has been having difficulty finding the necessary capital to finish construction of Imperial Pacific Resort, the permanent resort casino that will supplant IPI’s temporary casino Best Sunshine Live, which runs out of a high-end shopping mall on Saipan. Work on the resort was reportedly only able to continue after controlling shareholder Cui Liije purchased $100m of company bonds in February.

The offices of the permanent casino’s main contractor was raided by the FBI last week following the death of a construction worker. Charges have now been filed against two individuals after the authorities discovered at least 189 Chinese nationals working on the site using tourist visas that had long since expired.

The media spotlight on IPI has convinced at least one of its high-priced advisers that the pay isn’t worth the controversy. This week, the Philadelphia Inquirer reported that former Pennsylvania Gov. Ed Rendell had withdrawn from his $5k/month gig as a member of IPI’s advisory committee.

Rendell told the Inquirer that he’d rethought his role because Saipan was simply “too far away for me to effectively monitor anything that goes on. I’m taking people’s word for it, and that’s not a good thing.”

As for allegations of financial shenanigans at Best Sunshine Live, Rendell said his IPI contacts “keep insisting there’s nothing to it.” Those allegations came in a report from the Bloomberg news agency, and IPI announced last week that it planned to “take formal legal actions against [Bloomberg’s] repeated unfounded report.”