Home / Business / Philippine senate says Jack Lam is a victim, not a criminal 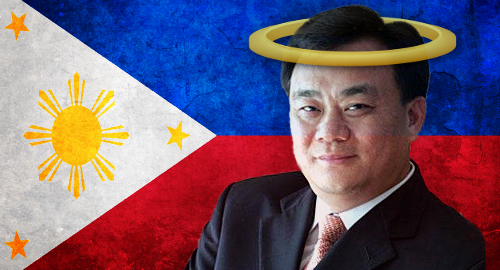 Philippine casino and online gambling operator Jack Lam likely won’t face criminal charges for bribery after all, according to the head of a Senate committee investigating the allegations.

Thursday saw the fifth and final public hearing by the Senate blue ribbon committee investigating last November’s arrest of over 1,300 Chinese nationals deemed to be working illegally at an unauthorized online gambling operation at Lam’s Fontana Casino in the Clark Freeport.

The arrests were swiftly followed by reports of meetings between Lam, his associates and various government officials, including Bureau of Immigration (BI) agents Al Argosino and Michael Robles and Department of Justice secretary Vitaliano Aguirre II.

The BI agents were accused of extorting P50m (US $1m) from Lam through a middleman, former police superintendent Wally Sombrero, to secure the release of the arrested Chinese workers. Sombrero was also accused of offering Aguirre a bribe on Lam’s behalf during a meeting with Aguirre.

The BI agents claimed to be conducting an elaborate sting operation to expose Lam’s bribery attempts and further claimed that two of their superior officers – Jaime Morente and Charles Calima – were complicit in the bribery/extortion scheme. Suggestions were also made that Aguirre was among those looking to profit from the situation.

Lam fled the country shortly after the arrests and hasn’t been seen since. Philippine president Rodrigo Duterte originally ordered Lam’s arrest for bribery and economic sabotage but later said Lam could resume his local gaming operations if he paid the necessary fines and back tax obligations, a sum totaling P13.9b ($276m).

OH, NEVER MIND
On Thursday, Senator Richard Gordon had harsh words for the two BI officials, saying he would recommend the filing of extortion charges against the pair, and possibly against their two superior officers as well. But Gordon effectively let Lam, Aguirre and Sombrero off the hook.

Gordon said that Lam, whose business had been disrupted by the arrests of his workers, had every right to approach Aguirre and seek help in resolving the matter. Gordon noted that neither Lam nor Aguirre had made efforts to hide their discussion.

While Gordon suggested Lam could face future probes by the Department of Label and Employment over those illegal Chinese workers, Gordon claimed Lam had been the victim of an extortion attempt, not the initiator of a bribery attempt.

On Thursday, Philippine Amusement and Gaming Corporation (PAGCOR) boss Andrea Domingo revealed that Lam’s representatives were in negotiations with her office regarding Lam paying “a partial amount” of the P13.9b the government figures it’s owed from his sweetheart gaming license deal, which allowed Lam to pay only one-tenth of what other casino operators remitted to the government.

AGUIRRE, SOMBRERO ALSO OFF THE HOOK
Gordon also said he found “no proof” of Aguirre’s involvement in anything illegal, noting that if Aguirre had intended to shake down Lam, he could have done so directly, and needn’t have bothered involving two BI underlings who’d want a cut of the proceeds. At worst, Gordon suggested Aguirre could have displayed “negligence,” but said “as a lawyer, I don’t think I was able to prove anything against Aguirre.”

Gordon also said he saw no criminal liability on the part of Sombrero, who (a) allegedly made the overtures to Aguirre to act as Lam’s ‘godfather,’ (b) was caught on video meeting with the BI officials to deliver Lam’s money, (c) kept some of that money as his fee and (d) fled the country once the brouhaha became public.

On Thursday, Gordon, who’d raked Sombrero over the coals during the former cop’s evasive testimony to the committee last month, chose to characterize Sombrero as a garden variety grifter, “trying to make money from both sides.” Gordon called Sombrero a “big talker” who convinced the involved parties that he could take care of things. “What’s wrong with that if he gets representation fees?”