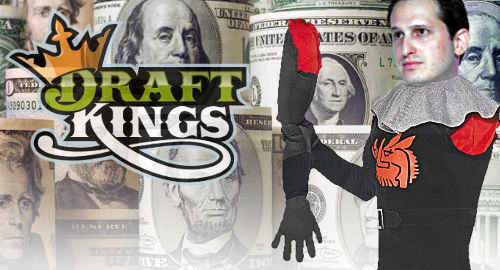 Daily fantasy sports operator DraftKings has raised over $100m in a new funding round led by one of the owners of Major League Baseball’s Los Angeles Dodgers.

Bloomberg was the first to report on Thursday that DraftKings had gotten out its begging bowl yet again, with the total value of private investment raised this time said to be in excess of $100m.

DraftKings CEO Jason Robins (pictured, with flesh wound) subsequently issued a statement confirming the funding round while declining specifics on how much it had raised. Robins did say his company had been looking for “a funding partner who could bring additional depth to the table.”

The Series E1 funding round was led by Eldridge Industries, a media holding company whose properties include entertainment trade publications Billboard and The Hollywood Reporter. Eldridge is headed up by Todd Boehly, a principal owner of the Dodgers.

Since it launched in 2011, DraftKings has not been shy about going looking for outside financial support, with the number of funding rounds now approaching double-digits. Most of the figures cited in these individual rounds have been estimates, but Thursday’s announcement is believed to bring the total amount raised to over $830m.

Before the DFS industry hit its legal headwinds in the fall of 2015, DraftKings reportedly held a valuation of $2b, promising a rich payday for Robins and other company principals when DraftKings filed for its inevitable initial public offering (which was said to be set for early 2016). By September 2016, DraftKings most recent funding round reportedly valued the company at just $1b and the IPO was AWOL.

Thursday’s announcement is also the first funding round DraftKings has conducted since it announced its pending merger with archrival FanDuel last November. The companies have set themselves a Q3 2017 merger target, although federal watchdogs have yet to weigh in on whether a merged entity that controls 90% of the US DFS market will pass the anti-trust smell test.

Neither DraftKings nor FanDuel has yet achieved profitability, but the apparent hope is that economies of scale and greater legal certainty in certain states will rekindle that aborted IPO excitement and allow the principals to finally cash out. Although at this point, it’s unclear how much equity Robins has left.