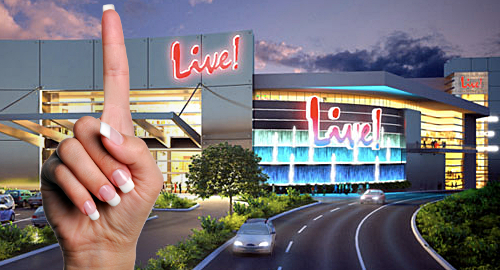 Maryland Live has regained its former status as the state’s top casino revenue earner one month after losing its crown to MGM Resorts’ new upstart property.

The figure is $2.5m higher than the state reported in January, the first full month of operations at MGM’s new National Harbor casino. However, subtracting National Harbor’s contributions, the five casinos that were open in February 2016 saw their collective haul decline 11.1% year-on-year.

In the years since it opened, Maryland Live had been the state’s unquestioned cock of the walk, handily fending off challenges from new entrants like Caesars Entertainment’s Horseshoe Casino Baltimore, which opened in August 2014.

Maryland Live’s winning streak ran out in January, when it was relegated to second place behind National Harbor. Undeterred, Maryland Live roared back to life in February, claiming top spot with revenue of $46.3m, which is $2.3m higher than January’s total but $7.7m less than the property earned in February 2016.

National Harbor reported revenue of just under $45.8m, around $3m less than its January total. As with January’s numbers, the property had a roughly even split in its revenue sources, earning $22.1m from table games, and $23.7m from slots.

Horseshoe Baltimore reported $22m in February, up nearly 10% from January but down 12% year-on-year. The year-on-year decline came courtesy of a nearly $3m decline in slots play, while tables improved $1m.

It remains to be seen whether Maryland Live will continue to reassert its once dominant position now that the hoopla over National Harbor’s grand opening has subsided, or whether MGM has some more tricks left up its sleeve to keep public interest sparked.