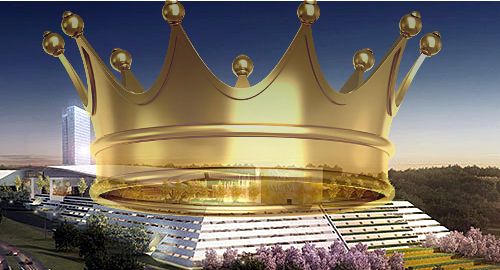 Maryland has a new number one casino operator after longtime revenue king Maryland Live was dethroned by MGM Resorts’ National Harbor resort in its first full month of operations.

Figures released Monday by Maryland Lottery and Gaming show the state’s six brick-and-mortar casinos generated revenue of $126.2m in January, nearly 43% more than January 2016’s total. However, absent the contributions of MGM’s National Harbor, the five casinos that were open in both Januarys reported revenue down nearly $11m, a 12.4% year-on-year decline.

The new $1.4b National Harbor, which opened to the public on December 8, reported revenue of $48.8m in its first full month of operations, up from $41.9m in December. The property’s gaming revenue was neatly split between table games ($24.5m) and slots ($24.3m).

Former casino king Maryland Live reported revenue of $44m in January, 15.5% less than the property earned in January 2016. Table games were down more than one-fifth to $16m while slots fared slightly better, falling 10% to $28m.

National Harbor’s numbers were likely goosed by the company pulling out the stops to celebrate the Chinese New Year festivities at the end of last month, which included an appearance by Chinese pop group Band of Brothers.

National Harbor is projected to generated revenue of $700m annually by its third year of operation, while a state-commissioned study suggested National Harbor would take a 16% bite out of Maryland Live’s annual profits by 2019.